Maui Mayor Charmaine Tavares last night announced her plans to seek re-election in 2010 during a campaign fundraiser at the Grand Wailea Resort in South Maui.

“I’m optimistic about our future and I want to continue to build on the successes we created since taking office,” said Tavares.

“We created a new path toward a positive future.Â  It is critical for out community’s well-being that we continue that effort,” said Tavares in announcing her bid for re-election.

Among those in attendance were fellow neighbor island Mayors Billy Kenoi of the Big Island and Bernard Carvalho of Kauai who spoke of the network and partnership that has grown from their participation in the Hawaii Council of Mayors.

Kenoi described Tavares as a solid, integral, committed, honorable, leader. Â “She always comes to the table well prepared, well versed on the issues, and has a good grasp of the complexities and challenges we all face.Â  We really look to her not only for her friendship and partnership, but her leadership,” said Kenoi.

“We’ve been to D.C. together, we’ve been to the legislature together, we focused on collective bargaining, security and transient accommodation tax-all of that.Â  It’s real partnerships that resulted in real accomplishments and real measurable outcomes,” said Kenoi.

Mayor Carvalho also spoke of the camaraderie shared among the mayors of Hawaii. 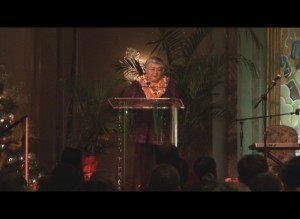 Maui Mayor Charmaine Tavares Announced her plans to seek a second four year term with a bid for mayor in the 2010 elections. Photo by Wendy Osher.

“When I can pick up the phone and call Mayor Tavares, Mayor Kenoi, Mayor Hannemann and share some of the issues, some of the concerns and challenges we are experiencing on our individual islands, and be able to communicate, and keep that communication open, that’s what it’s about.Â  That’s what Hawaii needs-leadership that is connected,” said Carvalho.

Former Maui county mayor Alan Arakawa has also launched a campaign to seek reelection in 2010.Â  And planning consultant Chris Hart is among those on the radar for the 2010 mayoral bid as well.Â  The primary is in September-just 9 months away.

During her announcement, Tavares outlined success during her term in obtaining federal funding for county projects.

“Since 2007, we have received over $5 million in federal funds that have gone towards getting additional buses for our very popular-and much needed-Maui Bus program.Â  In addition, with the recent passage of a bill in Congress, there will be $2 million in new funding available for Maui County to further expand our bus program,” said Tavares.

Tavares gave other examples of federal funding including $2 million for the planning and design of a new Emergency Management Center and the Wailuku Municipal Parking Structure as well as tapping into $30 million in federal stimulus funds for infrastructure improvements.

Looking to the future, Tavares highlighted ongoing efforts towards sustainability and clean energy as well as attention to the islands reefs, health care and environmental initiatives.

As for the economy, Tavares said she believes the county is on the road to recovery.Â  “I feel confident that, within the next year or two, we will see stronger and healthier signs from our business sector and the visitor industry.”Â  She went on to say, “Our Mom and Pop stores and larger businesses will be able to prosper once again.”