Minor League Baseball returns to Maui with plans to throw out the first pitch in May during the upcoming 2010 season at the Iron Maehara Baseball Stadium. The 22-member team will be called: Na Koa Ikaika O Maui, or the Strong Warriors of Maui.

While their coach has yet to be named, the team manager will be Cory Snyder, a former Major League baseball player for teams that included the Cleveland Indians, Chicago White Sox and Los Angeles Dodgers, as well a 1984 Olympian for the US Baseball team.

â€œIâ€™m excited to get started,â€ said Snyder during a press conference on Tuesday. â€œMay is not going to come soon enough for me. Iâ€™m hoping to come back at least a week every month and just be in the community and help get players.â€

â€œIâ€™m hoping to put together a team that has some local kids from the islands hereâ€”weâ€™re talking to four or five of them right now,â€ said Snyder. â€œI think that would just be great to have some ex-big league and ex-affiliated guys on the filed that are from the Hawaiian Islands,â€ he said.

In making the announcement, the team also signed their first player to Na Koa Ikaika O Maui rosterâ€”Mark Okano, of Aiea, Oahu. Okano played for four years at the University of New Mexico, spent a few years in Orange County and last year, played in Canada. 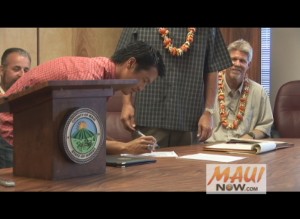 Mark Okano of Aiea became the first to sign on as a player on the new Na Koa Ikaika O Maui roster during a press conference on Tuesday in Wailuku. Photo by Wendy Osher.

Team President, Rick Berry took the honors in signing Okano as the first player for Maui. Berry has been working to establish the team for the past three years and hoped to assure Okano as well as others on his prospective list were free agents when the Maui team was ready to be launched.

â€œWe hope Mark is the first of many,â€ said Berry. â€œThe players when they come, they are playing for the love of the game, and thatâ€™s whatâ€™s beautiful about minor league baseball. Itâ€™s not about the money, Itâ€™s about the love and the passion they have for baseball,â€ said Berry.

The Okano signing was not the only offer on the table. Maui Council Member, Mike Victorino, the father of Phillies all-star Shane Victorino also offered a bit of aloha to Mauiâ€™s newest athlete by offering his home as a host family for Okano.

Also in attendance was Warren Suzuki, the father of fellow Maui Major league player Kurt Suzuki. Both Maui athletes demonstrate the character that Snyder is looking for in players on and off the field.

â€œI think if we can put a good competitive team on the field, we can have good kids with great character that go out and do clinics in the community. Weâ€™d like to go to Molokai and Lanai and take five players there and show what this is all aboutâ€”that we are good guys off the field,â€ said Snyder, who played at the collegiate level for Brigham Young University.

â€œItâ€™s finding the players that know what a great game baseball isâ€”is pretty much what itâ€™s all about. It gives these kids a chance that just didnâ€™t get seen in college. Maybe they got pushed out of affiliated ball. Maybe they got hurt and theyâ€™re trying to make it back. It gives these kids an avenue to show their skills off. And a chance to get back to affiliated baseball,â€ said Snyder.

Unlike the seasonal leagues that have played in the islands in the past, Berry said the new Maui team will be a part of the community year-round.

â€œWe want people to know that weâ€™re not just a summer league,â€ said Berry. â€œOur office is open year round. We will be here year round. We will be availableâ€”from the mascots to us in the front office, to the players, whenever we are available, we would be more than happy to be in the community doing autographs or anything we can to promote the team and the community,â€ said Berry.

On the business side, county officials say additional revenue will be realized in the form of visitor stays with boosters, and teams spending an average of five days and five nights on island. Berry said the real revenue indicator will be game night attendance.

â€œThereâ€™s three ways to generate revenue for us on our operating budget and that is: corporate advertisers; the concessions, ticket sales and merchandise combinedâ€”that comes into play; and a lot of it just depends on attendance,â€ said Berry.

Na Koa Ikaia O Maui already has plans for 44 home games, bringing teams in from across the U.S. and Canada. The team is the first of four to be formed in the Hawaiian Islands under the Golden Baseball League.