The Governor’s Council of Neighbor Island Advisors for Maui meets at 5 p.m. tonight, (Thursday, April 15, 2010) at the Kihei Community Center.  The guest speaker this month is DLNR Director Laura Thielen who will discuss the restoration of the reef at Keawakapu which was damaged in December. 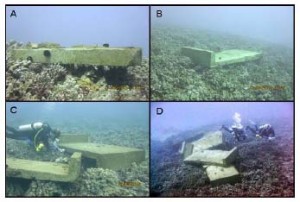 The modules weighing 2,800 lbs each, and measuring eight feet by four feet by one foot, were deployed on December 2, 2009.  A barge from American Marine deployed 1,400 modules during the effort.  However, during the deployment, a number of modules were accidentally dropped on live coral reef habitat.

Between January 5 and 7, 2010, NOAA and FWS biologists completed a total of 14 survey dives on the injury site.  Of the reported 1,400 modules deployed, 125 were found to have landed partially or totally on coral reef habitat.

Findings and recommendations were released on March 16th following an independent federal investigation.  The complete report is available at the following link: http://hawaii.gov/dlnr/dar/pdf/keawakapu.pdf

Anyone requiring special accommodations to participate at this meeting may call 243-5796 for assistance.