The passage of Senate Bill 2650 on Wednesday is expected to save jobs from being cut on the neighbor islands and preserve face to face contact for welfare and Medicaid recipients.  But officials with the Department of Human Services are opposed to the bill because it stalls their efforts at streamlining services, increasing efficiency, and saving the state an estimated $8 million in the process.

The Eligibility Processing Operations Division (EPOD) plan proposed by DHS called for 228 layoffs statewide and the closure of 31 offices.  Lawmakers passed the latest draft of the bill that exempts counties with populations under 500,000 from EPOD pilot project implementation.  That spares the neighbor island offices and employees from immediate cuts.

If the bill is vetoed by the Governor, supporters say there is time to consider an override before the end of the session. 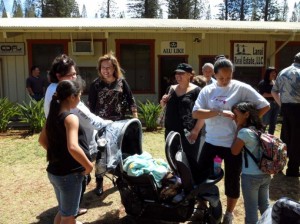 Rep. Mele Carroll meets with constituents on Lanai to discuss services provided by the Department of Health. Courtesy Photo.

Rep. Mele Carroll of Maui criticized the plan saying it lacked consultation, public hearings and dialogue with those most affected.

“I’m so grateful that my colleagues see, as I do, the need to retain face-to face contact on the neighbor islands,” said Carroll who recently returned from a visit with constituents on the island of Lanai over the weekend.

Carroll expressed concerns over limited resources and language barriers saying, “They need someone who understands their particular situation, who knows them personally, to ensure that there are no flaws in the application process.”

“Retaining eligibility workers on neighbor islands will enable DHS to better serve residents who don’t have access to a computer or a phone, or who are physically or mentally unable to apply for these services electronically,” said Carroll.