WO:  What prompted your decision to run for Mayor?

SK:  I think these times require us to take a closer look at how we manage our affairs as government.  Having been a part of the council in this term, has really solidified for me the idea that there is a necessary requirement for us to consider what changes we need to make right now so that we can not just look at these times as difficult times, but really make a paradigm shift, so that we’re looking at times that we anticipate and plan for times that are going to be better.

WO:  Could you explain your thought process in deciding on a mayoral run? 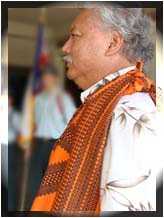 SK:  Being a part of the General Plan process and the responsibility of for looking at the Maui County General Plan, as well as the community plans for Molokai and Lanai, I think are going to be critical in how we view our community, our county, and Maui Nui for that matter, for the next 20-30 years.  So, if I can be a part of that, that’s one of the main driving points for me.  And I think the other part that goes hand in hand with that, is that I needed to have the support of my family.  It took quite a while for us to deal with some of the realities of being in public service and with some of the challenges that families go through… This isn’t just about an individual seeking public office.  It’s about a family that’s going to be involved in public office too.  Having made that decision with my wife and our four daughters, I think has been….that’s a real turning point for me.  And so I feel qualified, I feel I’m experienced, and I feel I’m ready to take on the challenge and I look forward to that.

WO:  With your seat being left vacant, do you plan on endorsing any of the candidates running to represent Lanai in 2010?

SK:  I haven’t given that part any consideration.  I hope that there are a lot of people that would consider running.  I know my beginnings… I know that one of the first real critical steps is actually coming forward and participating in the race, so I would encourage as many people from Lanai to consider looking at that.

WO:  Do you have any comment on the legal challenges over residency that have clouded much of your term since returning to the council in 2008?

SK:  I think it’s clear that this issue is really left to the courts to decide.  So I’m going to just allow that to take its course, but in the meantime, I’m not going to spend my time dwelling on that because I have more important things to do.  And I think looking at the mayoral race, is something that I’d rather concentrate all of my efforts and my energies on, and look forward in a positive light.  But those things, they will be left to their own course.

WO:  Are there any key points that you plan to address in your bid for the county’s top job?

WO:  Any concluding thoughts?

SK:  Having made this decision over the past couple of days, I feel very good.  As I’ve said, it was very important that my family support this and are a part of this race and I have their 100% support.  What’s really exciting is having made that announcement over the last couple of days, there’s been a real groundswell of support, and I’m really appreciative of that.