Firefighters remain on the scene of a brush fire in Ukumehame / Olowalu that burned at least 100 acres since it was first reported at around 2:30 p.m. on Monday April 3, 2010. For safety reasons, all helicopter operations ended at nightfall.

There are still no evacuations at this time and no injuries are reported. Maui Police continue to monitor the situation. County Community Relations Director, Mahina Martin issued an update Monday night saying, those seeking information on the emergency shelter at the War Memorial Gym, should contact the Red Cross directly.

The American Red Cross has opened a shelter at War Memorial Complex in Wailuku for residents that could be displaced from their homes due to the fire in West Maui. The shelter is located at 700 Halia Nakoa Street and is currently open. No evacuations were ordered at the time of this posting. 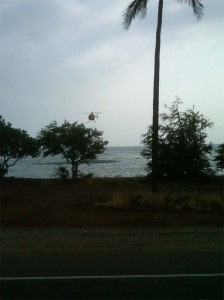 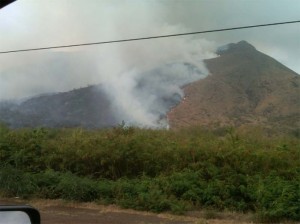 Residents of a subdivision near Olowalu are being issued a Precautionary Warning due to a Brush Fire that has burned 100 acres since it was first reported at around 2:30 this afternoon. Residents mauka of the Honoapiilani Highway at Olowalu, including the Olowalu General Store are being asked to prepare to leave the area, should there be a need to.

The fire remains mauka of the subdivision and poses no immediate threat. There are no evacuations taking place at this time, however conditions may change that may affect the area. Residents are asked to heed any instructions by emergency management and public safety officials.

The American Red Cross has opened an emergency shelter at the War Memorial Gym in Wailuku for those who may become displaced.

Three helicopters and the Fire Department’s wildland fire crew have been dispatched to assist firefighters. (Four of the six water tankers on scene have been provided by West Maui Land Co., Kiewit Pacific Co., Goodfellow Brothers Inc.) Wind conditions are reported to be light. There are no injuries and no structures were damaged at last report. The main highway remains open. 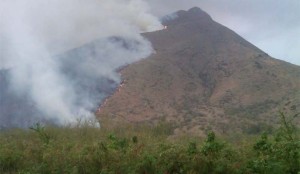 A 100 fire at Ukumehame/Olowalu forced a precautionary warning for residents of the Olowalu subdivision. Photo by Seth Welcker.

Firefighters are on scene responding to a brush fire that was first reported at 2:25 p.m. this afternoon in the Ukumehame area of West Maui.

The fire is burning mauka with light winds from the south. The blaze is estimated to be 100 acres at this time. No injuries are reported and county authorities say no structures are damaged at this time. Traffic is slow but the main highway remains OPEN.