H1N1 was confirmed in Hawaii one year ago today

It’s been one year since the first documented case of H1N1 or the swine flu occurred in Hawaii.  The first incident was reported on May 5, 2009 when a husband and wife couple and an unrelated child were confirmed to have the virus. 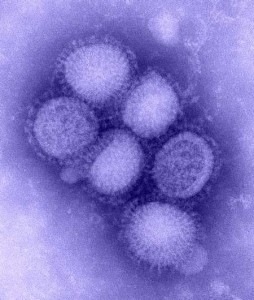 This image of the H1N1 influenza virus was taken in the CDC Influenza Laboratory. Courtesy the Centers for Disease Control and Prevention.

The World Health Organization declared H1N1 a “pandemic” the following month, the first of its kind in more than 40 years. President Barack Obama officially declared the H1N1 pandemic a national emergency on October 25, 2009.

On the one year anniversary, the Hawaii department of health is looking at its response and the ongoing effort to protect residents and the state of Hawaii.  Today, Health Director Dr. Chiyome Fukino will join State Epidemiologist Dr. Sarah Park, and the Centers for Disease Control and Prevention’s Dr. Tai-Ho Chen in discussing Hawaii’s efforts to date and its role moving forward.

Last month, the Department of Health issued a reminder of the need for continued vigilance after an outbreak of the H1N1 Influenza at a Maui school.  The outbreak was described as “mild”, but health officials said a number of students who attended the school were either not vaccinated or had not received the recommended two doses for children younger than 10 years old.