The fifth and final segment of Na Kamehameha Commemorative Pa’u Parade & Ho’olaule’a featured pa’u units from our own island of Maui and the islands of Kaho’olawe and Lana’i.  Pa’u Princess Tina Marie Lopez is proudly adorned with the lokelani rose of Maui and the pink color of the island.

This segment also features Cheer 808 Maui, a group that started as a pilot program through Hawaii Pacific University in 2008.  Cheer 808 now has 260 members enrolled from the islands of Oahu and Maui and holds six national and three international titles in Divisions level 1 and level 4.2.

Mahalo to Braddah Poki (Allen Pokipala) for commentary at the Lahaina Pizza Co., one of five commentary locations along the parade route. 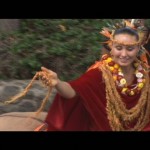 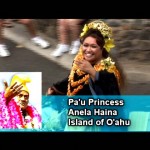 Pa'u Princess Anela Haina represents the island of O'ahu. She is originally from Waimanalo, but currently resides at the Villages of Leiali'i on Maui. Photo by Wendy Osher. 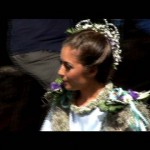