The county furlough schedule for the fiscal year that begins next week on July 1st, was released by the Mayor’s office today.

All County of Maui civil service and appointed employees, excluding uniformed Police and Fire employees under separate collective bargaining agreements that do not include furloughs, will be furloughed 12 days between July 1, 2010 and June 30, 2011. The first scheduled furlough day is Friday, July 16, 2010, and includes all managerial staff. 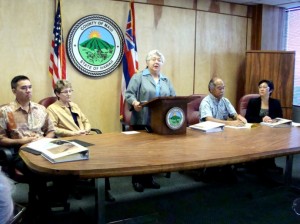 Mayor Tavares said the 6% budget decrease for FY 2011 is a consequence of the downturn in the global economy. The Mayor first announced her 1-day-per-month furlough plan during her budget presentation in March. File photo by Wendy Osher.

The 1-day a month furlough plan was proposed by Maui Mayor Charmaine Tavares and approved by the County Council as part of the County’s Fiscal Year 2011 Budget. Mayor Tavares has also agreed to reduce her pay to the equivalent of 12 furlough days.

The Office of the County Clerk, the Office of Council Services, and the Council district offices in Hana, Lanai, and Molokai will also be closed on scheduled furlough days.

The following office buildings and/or services will be closed.

● All payment windows and counters

There will be NO CHANGES or CLOSURES to the following:

● County facilities during special events that have required permits

Previous announcements regarding the closures of County swimming pools (closed on County recognized holidays) and landfills (closed on Sundays) are not associated with the furlough schedule.

“In cooperation with the HGEA and UPW unions, we have worked together to find ways to provide continuous services in those areas that impact public health, such as refuse collection and landfill operations, wastewater operations and water treatment plant operations,” said Mayor Charmaine Tavares. “I appreciate the unions’ valuable assistance throughout this process. To the extent possible, the dates chosen as furlough days were designed to take into account the County Council meeting schedule, the State Judiciary’s court calendar, Meals on Wheels delivery schedules and other operational concerns. The State of Hawaii has three different furlough schedules for various parts of their operations, so it was not feasible to attempt to match our schedule to theirs and still meet the needs of our community,” said Tavares.

“Establishing a furlough schedule has been a complex process, and since this type of mandatory furlough program has not been implemented before for County employees, we will be closely monitoring its implementation. I appreciate the public’s understanding and cooperation as the furlough schedule takes effect,” Tavares said.

The County continues to work with the Hawaii Government Employees Association (HGEA) and United Public Workers (UPW) to finalize implementation details and to ensure that our employees’ interests, as well as the public’s interests are taken into consideration.