The state wants to release a Brazilian scale insect to help in the control of the invasive strawberry guava tree that is crowding out native plants on Maui and other parts of the state.

Officials with the West Maui Mountains Partnership (WMMP) say strawberry guava has become a dominant species in roughly 2-5 thousand acres of the West Maui Forest Reserve and adjacent conservation lands since its introduction to the islands in 1825.

The action is proposed by the Hawaii Department of Agriculture to mitigate the impacts of the strawberry guava on native forests, the water supply and agriculture. 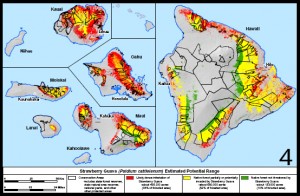 “Currently strawberry guava is abundant in many places in West Maui up to 2,000 feet elevation, has strong satellite populations up to 3000 feet and is know to exist over 4,000 feet in elevation,” said Christopher Brosius, the coordinator for the WMMP program explained in the report.

“The summit of the West Maui Mountains at Pu‘u Kukui stands at 5,788 feet and strawberry guava has been known to grow in elevations in excess of that on other islands. Given enough time and left unchecked it seems entirely possible that strawberry guava could consume vast expanses of the watershed. It seems further evident in my experience that this is also true statewide,” said Brosius.

Brosius said during his work, he has witnessed first-hand how strawberry guava can displace native watersheds, endangered species habitats, and render vast sections of land susceptible to erosion.

State Wildlife Biologist Dr. Fern Duvall of Maui was quoted in the report saying, “I see every day I am in the field doing work in the mountains of Lana‘i, Moloka‘i, or Maui the tremendously urgent need for biocontrol of strawberry guava. I am certain it is one of the very worst of habitat altering, invasive weeds to ever get a foothold in Hawai‘i,” said Duval.

The impacts have also been reported on the island of Lanai by Jay Penniman, the Maui District Endangered Species Research Specialist for the State Department of Land and Natural Resources.

“I see strawberry guava as the most significant threat to the continued viability of the Hawaiian petrel colony on Lana‘i,” said Penniman.

“We need every available tool if we are to preserve Lana‘ihale as a petrel colony and as a watershed. The scope of the problem is so great that without biocontrol to add to our tool bag we face a nearly impossible task of habitat restoration,” said Penniman in the report.

A draft Environmental Assessment has been prepared and is open for public comment for a full month beginning today and ending on July 23, 2010.  The complete report is available at the following link:  http://oeqc.doh.hawaii.gov/Shared%20Documents/EA_and_EIS_Online_Library/Statewide/2010s/2010-06-23-ST-DEA-Biocontrol-Strawberry-Guava.pdf