Maui’s Marie Osaki and Marvin Paularena were selected as Maui County’s 2010 Outstanding Older Americans.  Osaki and Paularena were honored along with three other finalists—Johanna Bergman of Lahaina, James Crowe of Kula, and Maxima Mariano of Kahului—at a luncheon hosted by the County’s Department of Housing and Human Concern’s Office on Aging. 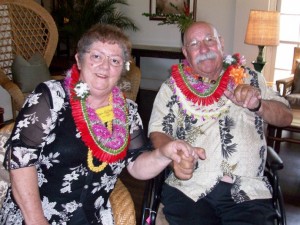 The 42nd annual event honored the seniors of Maui County who contribute to the community through volunteerism.

“The older adults of Maui County are among our most treasured resources, united by historical experiences and strengthened by diversity,” said Mayor Charmaine Tavares in a proclamation she presented at the event.

Osaki was commended for her work feeding the hungry and Paularena was recognized for his volunteer work with eight Maui organizations.

According to nominator Robin Lynn Rousselle of Maui Memorial Medical Center, Osaki has been the kitchen program manager for Hale Kau Kau House of Meals for St. Theresa’s Church since 1996 after beginning as a volunteer in 1995. Rouselle said Osaki has directly impacted the lives of countless residents by serving thousands of meals, bringing together hundreds of volunteers, and working with many community agencies and businesses while preserving the health, nutrition, and self respect of many of needy citizens.

Rousselle noted that Osaki demonstrates quiet leadership, selfless service and determination and unwavering daily dedication, and has spearheaded numerous fundraising events in order to keep the meal program in operation. “(Marie) has an extraordinary ability to inspire and bring together all ages and economic levels of volunteers, sponsors and visitors to bring forth her personal mission of providing food for the needy,” Rousselle said. “Even in these tough economic times, she has been able to meet the demands of growing need. She is considered a saint in the eyes of her volunteers and the individuals she feeds.”

Paularena, 76, was nominated by Adele Ching of Senior Medicare Patrol Hawaii for performing over 100 hours monthly for eight organizations since relocating to Maui from Seattle in 2002.

Among his contributions, Paularena advocates for seniors through his volunteer work as lead volunteer for Senior Medicare Patrol Hawaii and his role as a Maui Coordinator for AARP. Ching nominated Paularena for his active and routine volunteer service to Kaunoa Senior Services’ Retired & Senior Volunteer Program (RSVP) at Pacific Whale Foundation, the Maui Ocean Center Aquarium and the National Marine Sanctuary, where he educates people about the marine environment. Through the Foster Grandparent Program, Paularena recently assisted with a five- week intergenerational cooking school led by the University of Hawaii Cooperative Extension Service with youth from Maui Hui Malama tutoring program.

“Having to lift his wheelchair in and out of the trunk of his car several times a day requires a lot of effort, but with his wife’s assistance, Paularena is able to do the volunteer work he loves,” Ching wrote. “And Maui is richer for it.”