Wailuku Water Company and Hawaiian Commercial & Sugar Company (HC&S) will be releasing water past their diversions in Waihee River and North and South Waiehu Streams on Monday, August 9, to comply with a recent order issued by the State Commission on Water Resource Management. The order was a result of contested case hearing initiated by several Maui community groups petitioning to restore stream-flows in the Waihee River and Waiehu, Iao, and Waikapū Streams, collectively known as Na Wai Ehā.

“The hearing involved very complex issues requiring a careful weighing of in-stream and off-stream uses, but the Commission believes that its decision achieves a good balance to protect the health of the streams, while also providing for beneficial off-stream uses and native Hawaiian rights to water,” said Commission Chairperson Laura Thielen.

Due to safety concerns, access to the area will be restricted during the releases and people are urged to be aware of rising water levels on both streams throughout the day. Commission staff will accompany representatives from WWC and HC&S to measure and document the releases.

Some users receiving stream water from ditch systems may experience inadequate or a failure in ditch flows as a result of the releases.

The Commission determined that the minimum amount of water that should flow below the Spreckels Ditch on Waihee is 10 million gallons per day (mgd), which should result in 6 mgd of water flowing past the stream’s mouth. On Waiehu Stream, a minimum of 1.6 mgd must flow below the diversion on North Waiehu and 0.9 mgd below the Spreckels Ditch diversion on South Waiehu, which should result in 0.6 mgd flowing at the mouth of Waiehu Stream. These minimum flows are referred to as in-stream flow standards. 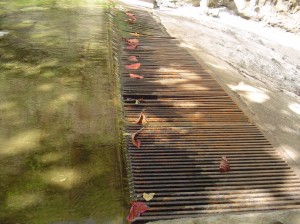 This grate above the Kepaniwai Heritage Park at Iao Stream is a source of contention as the Commission on Water Resource Management monitors the current use of old sugar company diversions. Photo by Wendy OSHER © 2009 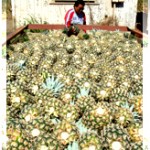