Introduction: My Name is Gladys Coelho Baisa and I am currently the Upcounty Council Member serving a second term, and I’m running for a third term on the County Council–thankfully unopposed.  Some of the items that I’m very concerned about, and 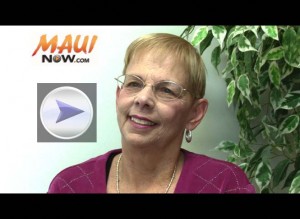 Click on image to view VIDEO of Gladys Baisa.

continue to be concerned about from before I ran, of course is the water situation Upcountry.  And since then, of course, we have this economic situation that doesn’t seem to be getting any better.  We have to worry about jobs, and now we’re also very worried about what are we going to do about our budget and how are we going to pay our bills.

Budget: Given the tough economic climate, would you support further cuts to non-profit programs? What are your priorities for continued funding?  Answer:  For me it’s a no brainer.  My background is the non-profit world–having worked at MEO for 37 years.  I’m very familiar with the non-profit world and what they do.  And I think it’s sad that we’ve had to make the cuts we have.  I would hopefully hope that we don’t make any more of them in the future.  Because we’re reaching the point where there’s nothing left to cut anymore.  Also, in the budget process, I’m very concerned that we make sure that we consider health and safety–it should be the primary thing–that people have police protection, fire protection, that we have the safety net of services that people need.  And I don’t see that those things should be cut in any way.  We have to cut in other places.

Water:What are your plans to improve wastewater treatment on Maui and your thoughts about injection wells?  Answer:  That’s a real complicated subject.  Most people focus on the injection wells when we talk about wastewater, but you know, it’s a really big issue.  The issues that we have in the ocean and the damage that we have to our reefs is coming from many things.  It’s coming from septic tanks; It’s coming from cesspools; coming from over-fishing; coming from the injection wells.  And God knows what else is getting into the ocean–run-off from golf courses.  I mean, it’s a complicated issue.  We tend to focus on the injection wells–and yes, they are an issue.  But it’s going to take time to get rid of them.  I asked the environmental boss for the county the other day–Dave Taylor–how much money it would take to move the sewer plant that we’re very concerned about in Kahului, and also to get rid of all of the injection wells.  And I almost fell over.  He mentioned three-quarters of a billion dollars, and probably quadrupling sewer fees.

Affordable Housing: What do you plan to do at the council level to ensure that affordable housing opportunities are available on Maui?  Answer:  That’s another tough thing that continues to linger.  When I came to the Council in early 2006, the Council had just passed the workforce housing ordinance–and everybody hoped that that would be the answer.  Well, it didn’t turn out to be an answer.  In fact, very few affordable homes were built under that ordinance.  This year, of course, it was revised to lower the percentage of affordable homes that are required when a developer is trying to build a development.  But even that–because of the economy–I think the ordinance didn’t have a fair trial.  Because just when it went into effect, the economic situation came about.  So it’s been hard to evaluate.  But for me, I’d like to see the County get involved directly in building affordable homes like we used to.  Because then there’s no profit motive and we can get access to land and I think we can do a good job.  It will be tough, but I think we can do it.

2nd Hospital: Do you think the establishment of a second critical care facility on Maui would help serve outlying communities, or deplete resources from the current Maui Memorial Medical Center?  Answer:  I don’t think it was a secret that I was the only public official that showed up at the certificate of need hearings to speak in favor of Malulani–for personal reasons.  I had had some very difficult situations, having to go to Oahu for treatment–and probably wouldn’t be speaking to you if I had not gone.  So, I was very much intrigued with the idea of another hospital on Maui and maybe a more up-to-date technology, up-to-date facilities.  Not that there’s anything with Maui Memorial–they do the best they can with the limited resources that they have–they serve people well.  However, it’s nice to have an option.  The other thing that I’m intrigued with is there’s an interest today about medical tourism.  I thought, wouldn’t it be neat if we had a super hospital here that people would come to have things done and stay and recuperate.  Why not recuperate on Maui if you have to have surgery?  I think it might be a great idea.

Closing thoughts:  We’re just about at the end of community events for my campaign.  As you know, I’m unopposed, so we won’t be doing a lot more.  I’d just like to make a offer to anybody out there who’s listening, that if you think I can be of any help to you, please call my office.  My staff and I try to return every phone call.