Introduction: Aloha, I’m Charmaine Tavares and I’m seeking re-election to the office of Mayor for the county of Maui.  I’ve spent the past three and a half years being your mayor since 2007.  We’ve had some really tough times and I plan to continue working on economic recovery for Maui County because that, I think is the single most important issue facing all of us here.  I also want to continue working on finding water resources so that we can accommodate all of the various needs that we have here, especially on 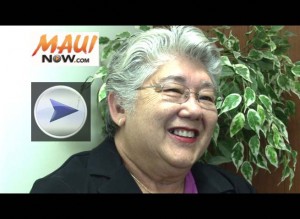 the island of Maui.  In addition to that, we’re going to continue our transportation with The (Maui) Bus, and expand routes when we can.  We’re working on bus stops right now, and we’re going to continue that.  So those are the major issues I think facing the county in the next several years and I’ll be focusing on those in the re-election.

Development:  What are your thoughts on smart growth and what will you do to prevent urban sprawl?  Answer: Smart growth for the islands is kind-of curious because when I was on the Council, I was one of the Council Members that had gone to a number of conferences dealing with the movement that was coming across America that was trying to get small towns revitalized, and city centers revitalized, and they kind of dubbed that “smart growth.”  What “smart growth” means is that you focus your residence in the area where they work and where they need services; where they play.  That way it cuts down on the need to commute to all different kinds of places in order to get what you need for your home and your family.  Smart growth has really been in Maui or in Hawaii ever since the Plantation Era.  When laborers were brought here, they built villages near the mills or where they worked.  They had transportation provided for them.  They had stores that they could walk to, theaters, parks, and things like that.  Going  back to the way it was–back in what we call the “old days” when we just used to walk around town and get everything we needed.  Fortunately I lived in Makawao town so I could walk to the bakery (and you know which bakery I’m talking about), and I never was at a want for having those wonderful long johns and cream puffs.

Permitting:  What are your thoughts on the county’s permitting process for B&Bs?  Should the approval for B&B’s rest in the hands of council members or the mayor’s appointed planning director?  Answer: As many people know, the Bed and Breakfast Ordinance was passed a few months ago after years of working on it.  We did have a Bed and Breakfast Ordiance (in place) earlier when I was still on the council, and that has been revised.  I believe that the revision to Bed and Breakfast Ordinance really makes it better and easier for people who want to do that business in their homes, they have a process that they can follow.  As outlined in the process now, depending on where you are, and how many rooms you want to have as your guest rooms, it will be approved either administratively by the Department of Planning, or it will go to the Planning Commission.  I believe that this process will work the best, rather than having it stalled going into the council.  I believe that some permits, still can go to the council, if its something outside of what the regulations are stated right now in the ordinance.  There is a process, I believe that the neighborhoods are happy about this.  I do, as I go around, see signs, which they are required to do, saying “Bed and Breakfast Application in Process” so that the neighborhood is aware of what’s going on in thier neighborhood.  I think that is key as to why we even have these regulations.  What do we want our neighborhoods to look like?  And the people in those neighborhoods should have a say in how their neighborhood is developed or not developed.

Fireworks Ban: Are you in support of or against it? Answer:  Actually, very good question, because during the State Legislature last year, the Association of Fire Chiefs had several bills before the state legislature regarding control of fireworks.  What actually passed, was a punt (as they say), back to the county, saying that each county could decide what they wanted to do about fireworks.  I personally am supportive of an all-out ban on fireworks, not just because of the fires that we’ve had recently, but because of the history of what’s happened with injuries, especially the small children with fireworks.  They say, yeah, their parents are going to supervise them, but you know what, a lot of parents don’t have the time to supervise them; or some friend gets a brilliant idea that they’ll take a pack of firecrackers and, “hey let’s go down to the field, let’s play around.”  You know, we were all once kids, and so we know what those temptations are.  But I think that for commercial or cultural uses–those kinds of permits can be given out–where a number of people can enjoy the fireworks while it’s in a controlled environment and the chances of fire occuring, or injuries occuring, are very, very small.  So yes, I do support a ban on fireworks.

Transient accommodations tax:  If elected to serve, what would you do to ensure that Maui keeps its share of the Transient Accommodations Tax?  Answer: I would do the same thing I did for the last two years.  Which was, all of the mayors, we got together.  Fortunately we have this Association of Mayors, and we fought to keep the TAT for the past two years.  What that means for us in the counties is that we have to be present at the legislature as these various bills are going through that are tryign to find money for the state and make sure that they are not taking money that rightfully belongs to the counties, and putting it in the state coffers.  So I will do what I’ve been doing, which is to spend a lot of time at the legislature making sure that some crazy bill doesn’t get passed that takes away that $18 million dollars or so that Maui County depends on to augment our budget.

Water:  What are your plans to improve wastewater treatment on Maui and your thoughts about injection wells?   Answer:  Our wastewater division has always been planning and has planned out a long term schedule of maintenance to ensure that Maui County will have little or no raw sewage spills anywhere.  We are very proud of our system here.  The folks that work in the wastewater division are excellent, they care, and they’re on a schedule to change out equipment, to replace pipes, pump stations, and those kinds of things.  In the process of doing this treatment of water, we have this thing called reclaimed water.  It’s water that’s treated that can be used for other purposes.  We are trying to find ways use that reclaimed water so that we do not need to use injection wells.  Right now, that is the approved method of getting rid of wastewater.  But there are many places where we’re using wastewater to, let’s say, irrigate golf courses.  I have set up a community working group that is looking at that very issue of–how can we find ways to use wastewater.  Because we’re spending money treating the water, and the it gets basically put in these injection wells.  The alternative to injection wells right now is ocean outfall, and I don’t believe that that’s what this community wants or the state wants.  So we’re working dilligently to find ways to use it and we’re continuing to look at all different kinds of ways.  With the emergence of renewable technologies, there may be a fine use where we combine getting rid of the wastewater and still yet, making energy out of it.  So, we’re working on it.

Closing thoughts: I’d just like to share that officially, my headquarters at Kahului Shopping Center next to Ichiban Restaurant.  People are welcome to stop by there.  It’s open from 9 a.m. to 5 p.m. everyday.  We may have extended hours later on, but right now, if you need some information or want to just stop by and check out something, please drop in.  Our campaign phone number is 242-5500.  We do have a website, and I encourage people to go there because there’s lots of stuff on my website.  It’s www.charmainetavares.org.  Go check it out.  We have lots of information about upcoming events, about things that are happening, various viewpoints or issues that are coming up (or are up), and we’re responding to some of those issues, so I encourage people to look at that.  I also feel that, because of the complexity of the challenges that we have in Maui County, combined with our economic picture right now, that we have to continue working together on solving these problems and making Maui recover from this economic downturn.  We are seeing some signs of recovery, namely the increase in tourism which is still the economic driver for Maui County and for Hawaii. So we need to take care of that economic driver.  We’re doing a lot of work in the tourism area and we’re seeing increased numbers of passengers arriving, more flights are coming in direct (three different airlines are now coming in that weren’t coming in before), and I think there’s hope.  Occupancy in the hotels has gone up, and this is good news for the workers of the hotels and for all of the businesses that depend on tourism, which is almost all of us, for their survival.  So we need to do this.  Now is not the time for us to go backwards, or stop, or start over.   We should continue what we are doing, and I believe I am the best person for that job right now.