Introduction: Aloha, my name is Don Couch, and I’m running for South Maui, County Council.  I have experience working in the county as a former Executive Assistant to Mayor Alan Arakawa, as well as former Deputy Director of Planning.  Pretty much, the most important issue right now is the economy.  We have to get the economy going; we have to get some jobs going that are not going to affect the environment or hurt the environment.  It’s going to be a delicate balance 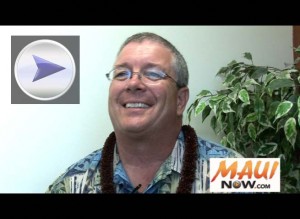 Budget:  What is your experience and understanding of the county budget; and your priorities for funding?  Answer:  Having worked with former Mayor Alan Arakawa, we definitely got deep into the budget.  The departments usually bring the budget together, and then we go through it, not as fine toothed comb as the departments do, but at least we go through and figure out what needs to be cut, and where we can try to cut.  What I would do is I would look at ways that we can get money that is being held in abbayance right now.  If you appeal your taxes, you still pay your property taxes, but that money goes into an account that we can’t touch.  About 98% of all appeals are denied, and so we should have access to that 98% right away.  We’re talking about $14 million to $20 million in that fund that we can’t touch right now–that’s a huge chunk.

Hawaiian rights:  New developments often have a provision that allows access for Native Hawaiians to participate in traditional and customary practices, yet it is sometimes viewed as a compromise where permission must be sought to do what some believe is an inherent right.  How can the council navigate the delicate balance between development and cultural preservation.  Answer:  We are on an island that is steeped heavily in culture and state laws allow for the preservation of the culture and encourage the preservation of the culture and cultural resources, and the county needs to follow along there.   The bigger issue is, what are we going to do not only with the cultural side, but our enviornment.  We have to strike a really good balance between our environment, the culutre and keeping people employed and also keeping people in homes.  So we have to preserve what we can while not stopping everything–because people are going to have children, people are still going to want to move here, and we have to figure out how we can follow the General Plan that says 40,000 people are going to be here–how do we make that balance?  I firmly believe in sticking to the General Plan, and if this is where the community says we want to do things, then that is where we are going to do it, and not outside.

South Maui Park:  What are your thoughts about the construction of the new South Maui Park?  Do you think it will help meet community needs, or was it poor planning given its proximity to the already established Kihei Community Center and the extra costs associated with blue rock removal?  Answer:  The South Maui Park is a real intersting story because the county had 150 acres mauka of the Piilani Highway that was designated for the park.  The problem with that is, it was nothing but blue rock and was completely out of the realm of county funds to develop that park.  We were able to–I think Mayor Apana–purchased the acreage where it is now.  I think it’s great planning.  I wish it were a bigger area, but because where it is, it’s a great idea because the Kihei Community Association and the Kihei community is looking more towards walkable communities, bike riding communities, so the closer you have all of the facilities, the better.  Blue Rock–where in Kihei are you going to develop where there isn’t blue rock?  It’s just one of those things that has to happen.  You’ve got to do some blasting.  It’s my understanding that they’ve done a great job on keeping the blasting effects down.  But’s that’s a really good place–It’s on the North-South Collector Road.  There will be some really good bike paths to and from the park, walking paths to and from the park, and it’s real centralized.  So that couldn’t have been in a better place.

Shark Tours:  The current council discussed possible county regulations to restrict shark tours in Maui waters.  What are your thoughts on the shark tour industry?  Answer:  I didn’t know there was a shark tour industry here on Maui.   I know that there has been rumblings–on Oahu–with some Shark Tours going on.  I am a paddler; I use the ocean a lot; I am concerned that people are attracting sharks closer into shore and making them more used to humans.  But that’s a state issue.  From my understanding, the best that the county can do is come up with a resolution requesting that the state look at this issue as a statewide industry.  For right now, there really isn’t anything Maui County can do other than that kind of thing–(introduce a resolution).

Closing thoughts:  The most important event that I would like you to be very aware of is the September 18th primary election, and I’m asking you to vote for me.  I promise to bring openness and some common sense to the South Maui County Council seat.  I will talk to all sides of the story.  You can’t make a good decision unless you hear all sides of the story and some good give and take–not just questions that you ask somebody and then don’t give them a chance to answer.  Common sense–you don’t close down a 100 year old mom-and-pop business because you owe a favor to one of its opponents.  You want to keep small businesses alive that are the ones that are keeping this county going right now.  You don’t want to get in their way unless it’s absoloutely necessary.  I ask you to vote September 18th, and then, don’t forget November 2nd for the General.  You can contact me at my website at www.doncouch.com; my email is [email protected].  I’d be happy to talk and respond.  I’ve gotten many comments and questions and I’m more than willing to answer them.