Introduction:  Aloha, I’m Mufi Hannemann and I’m running for Governor.  I’ve said from day one, job one would be to revitalize and grow this economy.  We need to put people back to work.  I know how difficult it is to meet the challenges of this economy, but if people are not working, and we’re not having visitors come to Maui, we’re not going to have the kind of funds we need to help our educational system, to fund government programs, and last but not least, to ensure that people feel a sense of dignity because they have a job–and I’m going to focus on that.  I’m also going to champion education like no other governor has done before.  I’m a 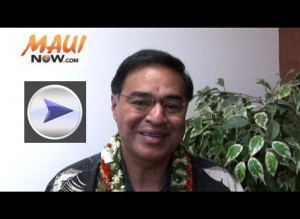 product of the local public schools.  I know what teachers can do for you–principals can do for you–with the love and support of your family.  And last, but not least, certainly for Maui, the environment is very important.  That quality of life that we’ve come to know and appreciate–we need to sustain that for generations to come.  My environmental initiative is called 21st Century Ahupuaa, where we pay homage to our Polynesian ancestors, and we combine that with modern-day best practices and technologies so that we can have renewable energy, create high tech jobs–all the things that we need to do to diversify this economy.   The economy, the environment, education–are the three E’s of what I would like to do for the people of the state of Hawaii.

Civil Unions:  What is your position on civil unions?  Should same sex couples be granted the same rights and privileges as legally married couples?  Answer:  I believe marriage is sacrosanct between a man and a woman and I stand behind traditional marriage.  However, when it comes to same sex couples, I believe they should be granted benefits and rights.  They should not be discriminated against in any form or fashion.  I’m ready, willing and able to sit down with all folks who have an interest in this issue, to make sure that when it comes to this area, we make sure that people never feel any discrimination in their lives.  And I think we can accomplish that.  But my view again is that marriage should be between a man and a woman.

Puunene Prison:  Are you in support of or against building a Prison Facility in Puunene on Maui?  Answer:  I can support the Puunene Prison, especially with the way that Sen. Shan Tsutsui is going to do it.  I think the whole process by which the current administration tried to do it was wrong.  They didn’t engage in I believe, meaningful community based planning, where they would ask the community to come forward so that they could share their concerns with pro and con.  They didn’t have the stakeholders, I believe, in place–such as MEO, so that they could incorporate their designs and their plans for this facility.  Last but not least, they need to get a better handle on the finances.  I intend to run government like a business–that’s what I did in Honolulu.  That’s why we have some of the cleanest audits that have ever been done of a county government with the 12th largest county in the United States.  So I support it.  We need to get the cost under control, because you need to have prison bed space.  But they way they did it was all wrong.  I’d like to go back to a point where we can engage the community to move forward on a badly-needed facility for Maui.

Traffic:  Honolulu recently launched a 5-1-1 traffic information website.  Similar funding was introduced at the legislative level for an intelligent traffic system on Maui equipped with real-time cameras and information—yet the bill failed to gain enough support.  When will the neighbor islands expect to see the same kind of support extended to Honolulu in this area.  Answer:   That’s the leadership style that I bring to the table–someone who will collaborate closely with the neighbor islands.  That’s how I’ve been managing Honolulu. I worked closely with your mayor, the mayors of Kauai and the Big Island to collaborate and make sure that if something is coming to Oahu, it should also go to the neighbor islands.  I know with this particular website, we weren’t consulted too, through our Department of Information and Technology.  They sort of took what they like about our website and incorporated it into what they’re trying to do there.  So as Governor, you have my commitment from day one, that if Maui, Kauai, the Big Island needs this, we should also give it to them at the same time that Honolulu gets it.

Transient accommodations tax:  If elected to serve, would you support the continued distribution of Transient Accommodations Tax revenues to the neighbor islands?  Answer:  Absolutely, the proof is in the poi.  I worked closely with your mayor and the other county mayors to form a common bond and a coalition that was very, very effective in asking the governor as well as those who supported taking away the hotel room tax from the counties.  There’s so many things that we do for the visitor industry from a county perspective.  It’s patently unfair to take it away.  I will not only make sure we get it back, but I will strengthen it because the counties are very vital to a viable visitor industry.

Closing thoughts:  I feel very privileged to have this opportunity run for governor of the state of Hawaii.  Now more than ever, we need someone with proven managerial experience–not legislative experience–to be the governor.  Because that’s what this job is.  The buck stops on the desk of a mayor and a governor.  You need someone with a collaborative leadership style that understands the importance of the neighbor islands.  I’ve worked on Maui before as a former state director of the Department of Business under John Waihee, and as a staffer to Governor George Ariyoshi.  I also was here on many occasions with C. Brewer and Company as a Brewer executive.  And certainly in the volunteer activities that I’ve been involved with, from Pacific Century Fellows, to scholarships, to taking some of the finest women basketball players to the mainland as part of Team Aloha–You know me.  I didn’t just pop up this year and say I want to be governor.  I’ve been there for you in the past.  I want to be there for you in the future.  I humbly ask for your vote for the Primary on September 18th.  Aloha.