Introduction:  Aloha, I’m Congresswoman Mazie Hirono, and I represent all of you in Congress in the 2nd Congressional District.  It’s certainly my privilege to serve you in Washington D.C.  I’m running for re-election, and I want you to know that I’m very, very focused on jobs and the economy–particularly because I know that our families are having a hard time.  I want to be sure to bet there to help out our working families and really to pay attention to the needs of the folks here.  That’s what it’s all about for me. 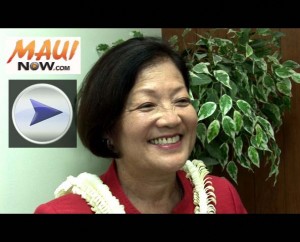 Stimulus Funding:  Do you think stimulus funds have been put to their best use?  If given the opportunity to infuse more stimulus funds on Maui, what areas would be a priority?  Answer:  The stimulus funds have brought over $1 billion to the State of Hawaii.  Here is the State of Hawaii that’s $1.2 billion in a budget-shortfall.  So, there’s no question that the billion dollars–to provide jobs, protect jobs for our firefighters, for our teachers–that was really important.  A bunch of that money, maybe about $240 million, went for infrastructure and really–on Maui, on Molokai, on all of the islands–the stimulus money went to repair bridges, our highways.  That’s jobs on the ground.  I think at a time when people are still so worried about jobs and the economy, the stimulus bill was really an important part of helping Hawaii.  And I think we need to do more.  I’d like to provide even more support for infrastructure for Hawaii because when you’re driving around you know that our roads need to be fixed, our bridges still need to be fixed.  We have all kinds of infrastructure needs.  On Maui we have water infrastructure needs.  These are all areas that I think the federal government could do more to help.  That’s not only economic support for Hawaii, but jobs.

Drought:   Drought conditions in the islands continue to pose a problem for firefighters as well as farmers and ranchers in the islands.  What can be done at the federal level to support fire suppression efforts and the agricultural industry?  Answer:  As you know the Secretary of Agriculture (Tom) Vilsack, determined that the entire State of Hawaii was in a drought situation.  That opens the door for our farmers and others to get some federal aid.  I know that you have been reached out to, and there are people here from the Department of Agriculture that you can contact.  At the same time, we know that over the long-term, we need to develop sources of water for agriculture, for firefighting, all of that.  I think that requires a long-term approach.  I  met with the Mayor and she wanted my help to have reservoirs established Upcountry to help the farmers there.  There are various kinds of long-term solutions that we have to work together on and I will do everything that I can to bring federal support to those kinds of long-term projects.

Akaka Bill:  What are your thoughts on the recently revised Akaka Bill, and do you foresee its passage in the near future?  Answer:  The Akaka Bill has passed the House three times, and I was an original co-sponsor of it in the two years that it most recently passed the House.  It’s a very important measure.  It is in the Senate, and I have high hopes that this time, the Senate is going to muster enough votes to pass it.  We now have a President–Obama–who has said that he will sign that bill into law should it pass.  His administration has worked very closely with us on the House side to draft as strong a language as we can to support the Akaka Bill.  When President Bush was in office, he said that he would veto the Akaka Bill.  I think this is the best chance we have of getting the bill passed to enable Native Hawaiians to begin the process for themselves as to what sovereignty could look like for them.  It’s important because until federal recognition of Native Hawaiians, in my view, every Native Hawaiian program, including OHA, including Kamehameha Schools, will all be subject to constitutional challenge.  That would be a tragic misuse of resources to fend off these challenges.  I am a very strong supporter of the Akaka Bill.  I’m glad that some language appeared to have been worked out to garner the governor’s support of this bill.  So, I’m keeping my fingers crossed that it will pass in the Senate this time.

Closing thoughts:  There’s just so much that needs to be done and as I said in the beginning, I’ve talked with so many people here–they’re concerned about their jobs, they’re concerned about the economy.  And that’s why my primary focus is on that, but let’s face it–Over the long-term, what’s really going to strengthen Hawaii is educational changes.  I have been working very hard as a member of the Education and Labor Committee in the House of Representatives, to focus on how can we make sure that all of our students graduate from high school.  Because if you don’t graduate from high school in this environment, it is going to be really tough to get a job and to support yourself and your family.  So graduating is really important.  We need to turn around low performing schools.  I have been a national advocate for quality early education because when a child has quality early education experience, that child is much more ready to succeed in school and in life.  So as I said, I am a national advocate for quality early education.  There’s so much we can do to enable our kids–our keiki–to truly be able to achieve opportunities in life through educational changes and I’m very, very committed to that.  I visit schools and teachers all across my district every time I come home.  There’s many, many other things that we can do.

Regarding the campaign, you can go on my website: mazieforcongress.com.  You can google me, you can tweet me.  There are so many different ways you can contact me.  And of course on the congressional side, I am your member of Congress, so just come to my website hirono.house.gov.  Aloha.