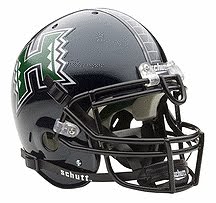 Kaniela Tuipuloto, the defensive tackle from Lahaina, dedicated the victory to doubters of the UH football program, a pre-season pick to finish sixth or worse in the nine-team WAC.

Instead, Hawaii finds itself atop the WAC standings after stunning No. 19 Nevada 27-21 before more than 40,000 fans on Saturday night at Aloha Stadium. The win was the fourth straight for UH, which improved to 5-2 overall and 3-0 in the conference.

Byrant Moniz completed 26 of 36 passes for 287 yards and three touchdowns – including a pair of first-quarter hookups with Kealona Pilares for a 14-0 lead.

But the real heroes of this upset played on the other side of the ball, holding off a Nevada’s bid to rally from a 17-0 deficit.

Nevada closed to 20-14 early in the fourth quarter, but Moniz engineered a six-play, 57-yard drive capped by an 11-yard scoring toss to Royce Pollard with 5:27 left.

Nevada still had a shot at overtaking UH after recovering an onside kick with 3:06 left. But a few plays later, Kaepernick was intercepted by safety Mana Silva, preserving Greg McMackin’s run at Manoa.

Hawaii’s back-to-back victories over Fresno State and Nevada has lifted UH into the role of top challenger to end Boise State’s dominance of the WAC. The third-ranked Broncos are 6-0 overall and 2-0 in the league.

The successful run t also has caught the attention of the pollsters. Previously ranked 19th, the loss to UH dropped Nevada out of the AP poll.

Nevada was among the other teams receiving votes, garnering 19, for the equivalent of 28th in the AP poll. Hawaii received eight votes and is tied for 29th in the AP rankings along with North Carolina and Northwestern.

Hawaii will try to extend its winning streak to five games when it visits Utah State on Saturday. The game is scheduled to kick off at 11 a.m., Hawaii time, and will be aired on AM900.

Individually, three UH players are ranked among the nation’s most productive performers.

Moniz retained his national lead in passing yardage with 2,532 and moved into first in touchdown passes with 21.