VOG: What it is and How to Lessen the Effects 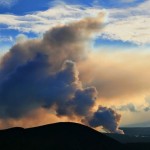 VOG refers to air pollution caused by volcanic activity, a common environmental concern in Hawaii, especially on the Big Island. The emissions from active volcanoes contain potentially harmful substances like hydrogen sulfides and acid-forming sulfur compounds. While VOG is not as visible as some other types of air pollution seen throughout the mainland of the United States, it can have a significant impact on individuals who are particularly susceptible.

VOG levels vary based on the level of volcanic activity at any given time. It can also change with the winds that typically come in from the Northeast, carrying the VOG around the mountains. Levels range from no VOG, where the horizon is very sharp with little haze; to extreme VOG, characterized by a reduced visibility and bluish tint to the horizon. The levels tend to get worse at elevations between 300 and 6,000, with less VOG at sea level. Elevations higher than 6,000 feet also see diminished VOG levels.

Most Common Locations for VOG

The specific locations for VOG exposure vary on the island, depending on the activity of the volcano and the winds in the area. Recent changes in the volcanic activity at Halemaumau Crater have increased the levels of VOG. The smog is particularly prevalent in Hawaii Volcanoes National Park, but is also frequently seen between the areas of Kailua-Kona and Ocean View. The smog can also be present around Volcano Village and Hilo.

Reducing the Impact of VOG

If you are concerned about your exposure to VOG while on the island, there are steps you can take to reduce its impact, including:

If you feel any symptoms of VOG exposure, such as headache, watery eyes, or difficulty breathing, get indoors and contact a healthcare professional if the symptoms are severe. VOG is a very real environmental concern in some parts of Hawaii, but education and preparation are the keys to staying healthy on your visit to the islands.