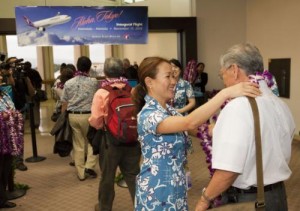 Passengers on Hawaiian Airlines' inaugural flight from Honolulu to Tokyo's Haneda Airport were presented with a fresh flower lei upon boarding. Hawaiian is offering daily, nonstop service between the two destinations, the only U.S. carrier to do so. (PRNewsFoto/Hawaiian Airlines, Inc. by John De Mello)

Hawaiian’s inaugural flight to Haneda was preceded by festivities at the boarding gate featuring Hawaiian music and hula, a Japanese cultural dance performance, a traditional Hawaiian blessing, and the giving of fresh flower lei to the passengers.

“This is a momentous day for our company and a huge step forward into a region that offers tremendous potential for new growth opportunities for both Hawaiian Airlines and Hawaii tourism,” said Mark Dunkerley, Hawaiian’s president and CEO.

“We have devoted months of planning and preparation into our new Haneda service and added some special touches that will make travel to Hawaii an even more enjoyable experience. I am confident travelers on our Haneda-Honolulu route will embrace this special presentation of our unique brand of Hawaiian-style service that has earned the loyalty of customers everywhere we fly,” added Dunkerley.

Haneda represents the most significant international expansion ever for Hawaiian Airlines, and starts the company on a course for future growth to other major Asia markets.  The airline is on track in adding new and longer-range Airbus A330s and A350s to its fleet. In January, Hawaiian will launch nonstop service, four times weekly from Honolulu to Seoul-Incheon in South Korea.

Earlier this year, Hawaiian was one of only three U.S. airlines to win government approval to service Haneda Airport with international flights, and is launching its operations months ahead of the other two. In addition, Hawaiian is the only U.S. carrier offering flights between Haneda and Hawaii.

Hawaiian’s new Haneda service is expected to provide a boost to Hawaii’s visitor industry with the addition of approximately 100,000 new air seats from the state’s second-largest tourism market.

Beginning this week, Hawaiian’s Flight #457 departs Honolulu International Airport daily at 6:05 p.m. and arrives at Tokyo’s Haneda Airport at 10:05 p.m. the following day. Starting November 19, Return Flight #458 will depart Haneda daily at 11:59 p.m. and arrive in Honolulu at 12:05 p.m. the same day. (Tokyo is 19 hours ahead of Honolulu and the flight crosses the International Dateline.)

Hawaiian will initially serve the Haneda-Honolulu route using its wide-body, twin-aisle Boeing 767-300ER aircraft, which seats up to 264 passengers with 18 in Business Class and the rest in Economy Class. Hawaiian plans to introduce its new and larger 294-seat Airbus A330-200 aircraft onto the route at a later date. 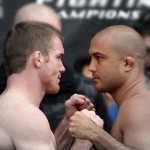