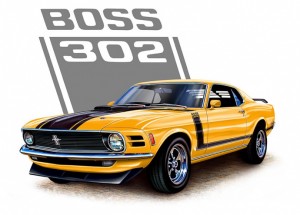 The Ford Mustang has for a long time been the comfortable consumer-grade sportscar.  Never too sporty, and thankfully never too pricey, the Mustang fit right in the middle of American muscle.  The new Mustang Boss 302, on the other hand, is ready to push the envelope with new TracKey technology.

The Ford Mustang Boss 302 will allow drivers, with the switch of a key, to turn their here to there commuter Mustang into a 444 horsepower, v8 race-ready machine.  The car with TracKey option will come standard with two keys, a black key for commuting and a red key for racing level performance.

Each key sends a message to the car’s computer to change various settings inside the engine from the top down including: launch control, braking, the fuel mixture, and some 200 other parameters.  When it all comes together, a TracKey enabled Mustang Boss can be as much of a daily commuter or a full powered sports car as the driver desires.

The new TracKey package doesn’t stop at a simple adjustment of the engine specifications.  No, the new Mustang Boss with TracKey also allows for adjustment of the launch rotations per minute for the fastest, and most comfortable, acceleration.

Ford has declined to release specifics about the final release date or package price, but did take the time to explain that each TracKey can be installed by any Ford dealership.  The package will be available with 2012 Mustang Boss automobiles, but it has neither been confirmed or denied whether the new TracKey will come as a preset option or if it will be sold solely as a secondary add-on.  Its anyone’s best guess whether the new technology will share the same release date as the 2012 Boss.

Unfortunately for some, the special tunings afforded only by the red key may not be street legal in some cities and states, though its hard to believe that will stop anyone from giving the key a second thought.

The question now is whether Ford will bring the TracKey to other, less sporty models like the Ford Focus, or instead keep it only for its American muscle car.  For now, it appears, the TracKey will be reserved solely for the thrill seeking Mustang enthusiasts, though as with any new feature, its likely to trickle into other cars, and brands.