A toddler was injured after stepping into buried charcoal this weekend, prompting a reminder to the public about the dangers of illegal ground fires at the beach.  The incident was reported at around 3 p.m. Saturday at Nanakuli Beach, also known as Tracks.  The four-year-old boy suffered burns to his foot in the incident. 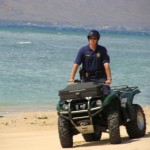 Similar incidents have been reported in recent years including incidents on Maui and at Bellows on Oahu.

An investigation has been launched by the department’s Division of Conservation and Resources Enforcement.  State officials believe the coals were left by an individual that had been barbecuing at the beach.

Officials with the state Department of Land and Natural Resources (DLNR) say it is illegal to have ground fires, whether bonfires or for cooking, on public beaches.  If coals are used for cooking at designated sites, they must be completely extinguished and disposed of properly, not buried in the sand.

“Injuries on the beach from unauthorized fires are preventable,” said William J. Aila, Jr., DLNR interim chairperson. ”We ask for the public’s kokua to voluntarily comply with these necessary safety requirements in order to protect our families and especially young ones,” said Aila.

Some important safety guidelines issued by the state include the following:

– Ground and open fires are prohibited on all state beaches and state recreational areas.

– Open fires can escape and cause major fires in adjacent areas.

– Cooking fires are only allowed in devices specifically designed to contain the fires.

– Do not discard hot coals near tree stumps or in undesignated areas – coals burn tree roots and can kill the tree.

– Buried coals and nails can be even more dangerous since they are difficult to identify, easy to step on and easy to fall onto.

– Hot coals used for cooking should be fully extinguished by dousing with water, turning them over to ensure they are out. Then dispose of them in a designated container designed for that purpose.

– Or when they are fully extinguished and cool to the touch, take them home to dispose of safely. Never dump them on the beach and bury them in the sand where they can smolder and retain their heat for a long time.

Open fires and driving on the beach are both violations of Hawaii law and are subject to hefty fines.  Violations can be reported to the DLNR DOCARE Hotline at 643-DLNR or for emergency response, 9-1-1.

(Posted by Wendy Osher, supporting information courtesy State of Hawaii, DLNR) *** If you enjoyed this post, you may also like our story on Restricted access at Ahihi Kinau on Maui. 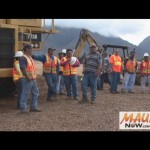