A team from the Aloha State has reached the Final Four of an NCAA basketball tournament. This is a joke, right? Nope. We’re serious. 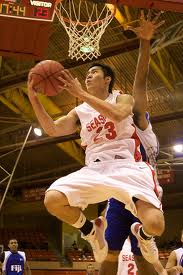 The event in question is not the Division-I tournament — also known as the Big Dance — but, rather, the D-II hoopfest in Springfield, Mass., which we’ll take the liberty of describing as the Little Dance.

The Seasiders advanced into today’s semifinals with a 96-89 win over Bloomfield College yesterday in the Elite Eight.

But the going gets much tougher today as the Seasiders next must challenge nationally top-ranked an unbeaten West Liberty of West Virginia in a game that will be aired in Hawaii starting at 2:30 on digital channel 247.

West Liberty improved its season record to 33-0 by routing Anderson of South Carolina 113-95 in th quarterfinals. By comparison, BYU sports a much more modest 21-8 mark.

But the Seasiders have been on a roll and were red-hot yesterday, making 61 percent of their shots and hitting 11 of 19 from behind the arc. And BYU won handily although its leading scorer, Marques Whippy, saw limited duty because of early foul problems and finished with just 12 points.

At the West Regional in Anaheim, second-seeded San Diego State will enjoy a de facto home court advantage when if faces No. 3 Connecticut at 1:15, Hawaii time.

In the second game of a double-header, No. 1 seed and defending national champion Duke will square off against No. 5 Arizona at 3:45. Those two games will be televised on CBS.

The remaining four Sweet 16 games are on tap for tomorrow.

The Southwest Regional in San Antonio is filled with Cinderella teams as No. 1 Kansas faces No. 12 Richmond at 1:27, followed by No. 10 Florida State versus No. 11 Virginia Commonwealth at 3:57.

Interestingly, both Richmond and VCU are based out of the same Virginia town – and one which has never been regarded nationally as a hotbed of college basketball. But that town can now claim as many teams still alive in the NCAA tournament as most major conferences, with the exception of the ACC.