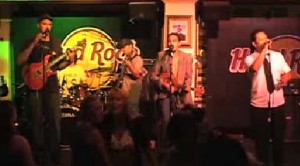 After winning Maui’s Battle of the Bands last month, “Sounds of Addiction” earned a spot as a regional finalist in the Hard Rock Cafe’s 2011 world-wide competition.

They are among only two Hawai’i bands remaining (the other is The Deadbeats from Honolulu), and among just 40 bands that are still in the running for the 2011 title.

The Maui band is made up of five members: Peter DeAquino – Ukulele/Vocal; Adam Masterson – Guitar/Vocals; Nestor Ugale, Jr. – Vocals; Nick Wakida – Drums; and Kama Kana – Bass Guitar.  In their online profile, the band states that they seek righteousness through their addiction to music.

Fans have a chance to vote for the Maui band and view a video of them online through the Hard Rock Cafe website. Regional voting continues through April 25th.  A single finalist will advance from each of four regions and compete for a chance to perform at the Hard Rock Calling event, June 24-26, 2011 in London. The winning band will perform on the main stage on the same bill as Bon Jovi, Rod Stewart, and Stevie Nicks.

Get Your Reggae On the Road with Katchafire