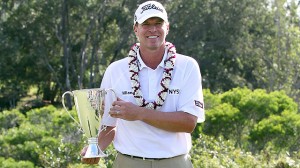 This time Steve Stricker is leaving Maui with the winner’s trophy. And for the first time, he’s already booked reservations for a return trip.

The Stricker annual family vacation next January will include dad’s new title — Defending Champion — of the PGA Tour’s season-opening Hyundai Tournament of Champions.

With a final-round 4-under 69, Stricker won his first event in the 50th state by three strokes. It was Stricker’s first win in six tries on the Valley Isle.

“It’s great to win here,” said the 45-year-old family man, who loves the islands and never fails to bring his wife, Nicki, and two daughters. “The best part is we get to comeback next year already. They (the family) had a great time. We are going to stay over tonight and then mosey on over to Honolulu tomorrow and we’re looking forward to next week, too. We always have fun here. Maui is a tough island to leave because it’s so peaceful and beautiful all at the same time.”

Sort of like Stricker’s game this week against a 26-player field at Kapalua’s Plantation Course.

Stricker entered the final round with a five-shot lead but saw it reduced to one stroke on the front nine. But just like he did in Sunday’s third round, he reminded himself to be patient and trust in the work he has done to get to this point — No. 6  in the world — would guide him through adversity.

So instead of coming unglued, the wily veteran answered the challenge by making back-to-back birdies at the turn, restoring his lead to three shots, and no one got closer than two shots the rest of the way.

Stricker birdied the 72nd hole before a Kapalua gallery that included family and friends en route to his 12th career win, which elevates him to No. 5 in the Official World Golf Ranking.

His eventual walk off the 18th green got side-tracked when 13-year-old Bobbi Maria and 5-year-old Isabella greeted him with a hug. His wife, Nicki, sweetened the victory with a kiss as the couple fought back tears after sharing a joyful embrace. The special moment was fitting for Kapalua, “peaceful and beautiful all at the same time.”

It was his ninth PGA TOUR win since he turned 40, and his eighth title in his last 50 tournaments. 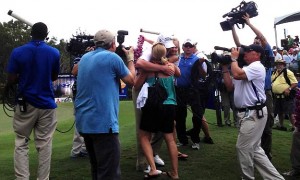 “I never let up today, but it was tough,” said Stricker, who finished at 23-under 269. “It’s always tough trying to win and even more tough when you have a lead like the lead I had. I played good though, I just didn’t get the ball in the hole like I wanted to. But overall I am very proud of what I played today and it’s always cool to get a hug from your family walking off after you win.”

Stricker enters next week’s Sony Open in Hawaii looking for his first win on Oahu in 13 starts. His victory did earn him 500 FedExCup points, as he assumes the early lead in that race.

Scotsman Martin Laird shot a 6-under 67 to finish in solo second at 20 under. Webb Simpson and defending champion Jonathan Byrd each shot 68 to finish tied for third at 19 under.

The trio each got within one shot of Stricker on the front nine, but not for long. Stricker rolled in a 25-foot birdie putt on the par-3 eighth, and pitched to tap-in range at the par-5 ninth to regain control.

Prior to that Stricker said he was beginning to feel a little uncomfortable.

“It was just like yesterday all over again and I felt it kind of slipping away,” he explained of his 54-hole cushion. “But I was still patient, frustrated, but patient. I told myself if I can get a couple back at the turn and I will be alright. The birdie at eight calmed me down quite a bit.”

The 203-yard hole turned out to be a key factor in Stricker’s triumph. In 72 holes played this week, Stricker had over-par holes just four times. Two of those came at the 8th. So when his five-stroke lead was cut to one shot, Stricker put his nerves in check before dropping the long putt.

Age and experience currently fuel his golf game, and winning continues to provide the confidence he needs to produce in clutch situations.

“I don’t know if it’s just experience,” Stricker explained. “Obviously I’ve changed my game and my swing and all that, and I have a lot more confidence nowadays than I did when I was younger. I have a better Idea of what I’m doing with my swing and where the ball is going, so I guess if you put it all together, I got older and worked on my game to where I feel good about it.”

Playing the last two rounds as a front-runner is not an easy feat.

“It’s always tough. I’ve been in that situation before and it’s almost just as hard or even harder because you’re expected to win and all the expectations are for you to come out on top. I knew the guys were going to come out firing and making birdies, getting close to me early on in the round. I was prepared for that, but I wasn’t prepared to 3-putt No. 5 and throwing another shot away at six. That kind of raised some red flags for me early in the round, but I hung in there. I was really proud of the way I hung in there the last couple of days.”

Whenever his patience was tested, Stricker said his game responded positively.

“I had good feelings coming into today, my swing felt really good, I was aggressive, way more aggressive today than I was yesterday. But it was just harder to get the ball in the hole. I don’t know if this win would have happened if I was a lot younger. But being out here a few years and experiencing the things that I’ve experienced it made it a little easier for me to hang in there.

In all, Stricker and 17 other pros from the Hyundai Tournament of Champions will be playing on Oahu, Jan. 12-15, at the $5.5 million Sony Open. 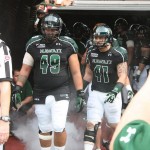 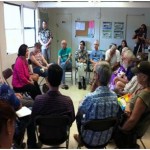