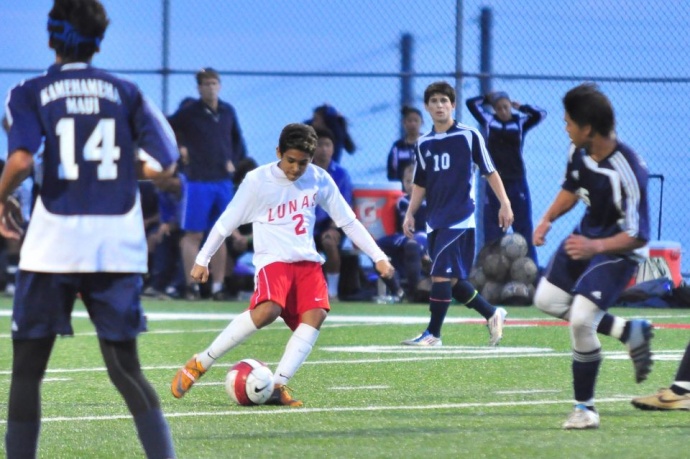 The 5-foot-3, 108-pound junior midfielder accounted for the only goal of the match Tuesday night, when his shot at the 54-minute mark ricocheted past Kamehameha Maui’s goal keeper and padded the Lunas’ lead in the Maui Interscholastic League boys standings.

The 1-0 win, before a home crowd at Lahainaluna Stadium, improved the Lunas’ record to 8-2-1, good for 25 points, four points better than second-place Baldwin (7-3). The two teams meet next Wednesday, Jan. 25, at Keopuolani Park. Lahainaluna, which caps its 14-game schedule with a double-header against winless Hana next weekend, has never won the MIL boys title or qualified for postseason play.

Meanwhile, in MIL girls soccer, Lahainaluna and Kamehameha Maui played to a 2-2 draw in Tuesday’s early match at Lahainalua Stadium. The match capped the MIL regular-season for both teams. The Warriors (10-2-2) have already locked up a state tournament berth next month by securing a second-place finish in the girls division behind league champion Baldwin (12-1). The Lady Lunas, who enjoyed goals by Casey Egan and Casey Vanderlaan on Tuesday, finished 5-6-3.

Both crews remain unbeaten with two regattas left on the MIL schedule. A team’s top three finishes count toward the final standings.

Lee, Hamilton and Kaulu Lu’uwai teamed with Ali Hoeck, Mikela McDaniel and Marina Sanchez to take first place in the girls race in 4:30.19. Kamehameha Maui was the runner-up in the girls race for a third consecutive week, with a time of 4:42.32.

The race of the day came in the varsity boys division, where the Maui High claimed the two opening regattas, but finished second to Baldwin on Saturday by 1.23 seconds. The Bears’ Xavier Leon, Justin Firmignac, Vetekina Malafu, Vili Tolutau, Kaimana Hookano and Jeffrey Tokanang won in 3:51.40.

The Baldwin boys were second in regatta No. 2 after failing to finish in the opener. The King Kekaulike boys, second in the season standings, placed fourth.

Ka Lae Pohaku is scheduled to host this Saturday’s regatta, with the league finale on Jan. 28 at Kahului Harbor.

MIL meets Nos. 4 and 5 are scheduled for Friday at Kihei Aquatic Center and Saturday at Kamehameha Maui Pool.

This Saturday’s meet is at Kamehameha Maui.

Baldwin Stays Unbeaten in Boys Hoops With Rout of Warriors