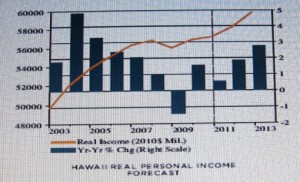 Hawaii’s economy ended the year with mixed results. Visitor arrivals and spending surged at the end of 2011. But in the broader economy, job growth remained anemic and the unemployment rate increased according to data released today by the University of Hawaii’s Economic Research Organization (UHERO). Overall the report called 2011 “a bitter year” for the state.

Among the hopeful signs were the visitor industry figures. The totals for arrivals for markets other than the mainland US and Japan were particularly strong.

Canadian arrivals were up 18% in 2011 and overall arrivals for the “other” category were up more than 17%.

Near term scheduled air seats are substantially above 2011 levels. Lift from Canada is nearly 30% higher, mostly to neighbor islands.

Seats from Sydney and Seoul to Honolulu are about 40% each. 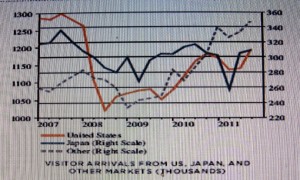 Visitor arrivals from Canada, Australia and Korea (dotted line) were one of the few bright spots in the economic report for 2011. UHERO graph. Click to enlarge.

Hopeful signs include proposed increases to visa capacity for visitors from Brazil and China. Also under consideration is a proposed Taiwan visa waiver agreement. Both would be encouraging for future growth of visitors to Hawaii. UHERO expects arrivals from markets “other” than the US and Japan to rise additional 12% in 2012 before slowing in 2013.

Reviewing other aspects of tourism, UHERO said the Hawaii visitor industry staged a modest recovery late in 2011 after a disappointing performance mid-year when the industry struggled with the impact of the Japanese earthquake, high oil prices and weak US consumer confidence.

There was a sharp uptick in September with arrivals increasing 4.1% over the prior year. The opening of Disney’s Alulani Resort on Oahu contributed to this increase and neighbor island markets also rebounded.

Year-over-year growth remained positive with a very strong December. The year as a whole saw as 3.5% increase in visitor spending. Spending figures were also boosted by a nearly 9% higher average daily room rate.

UHERO pointed to the positive impact of the APEC gathering held on Oahu in November. The conference was beneficial for hotels in Waikiki, where room rates were as much as 41% higher than the same week last year and occupancy peaked at 97%.

Though the 4th quarter visitor results looked good, the forecast for early 2012 is not as promising. UHERO said that the planned cancellation of non-stop flights from Chicago and Minneapolis (to Oahu) and a significant decrease in the number of flights from Chicago, Houston and Orange County will drag down domestic arrivals in the first quarter of 2012

These changes are expected to affect Oahu arrivals the most. Airline lift to neighbor islands will rise somewhat in the coming months. Overall UHERO expects only a 1.1% gain in mainland arrivals in 2012.

The cost of fuel and the likelihood of future increases is expected to restrain visitor growth.

On the plus side, the economists pointed to the planned Hawaiian Airlines expansion, including the projected creation of a hub in Maui. UHERO anticipates a 4.1% growth in total arrivals in 2012, declining in 2013 to a roughly 2% growth rate.

Neighbor island construction continues to slide with no relief in sight. In December it was nearly 13% lower than the prior year with the greatest weakness on Maui. The UHERO economic team said it will present more detailed picture in their forthcoming ‘Hawaii Construction Forecast.’

On Oahu construction employment bottomed out in mid-2010 and since then there has been a net gain of about 1,500 jobs.

Perhaps the darkest news from the building trades came from public sector where public contracts awarded for the first three quarters were off a staggering 67%. 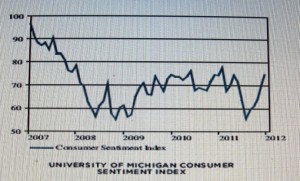 Consumer confidence in Hawaii took another dip at the end of 2011. UHERO graph.

The outlook for the long delayed rail project in Honolulu continues to be murky. Funding and legal challenges remain and may not be resolved till the end of the year, if then.

The report forecast that construction job gains will begin in earnest this year. Assuming rail goes forward, job growth (on Oahu) could expand by more than 4% this year and as much as 10% next year.

The market for residential real estate has yet to stabilize.

On Maui, median prices were down nearly 5%, but volume was up more than 10%. On Oahu the median single family resale prices in 2011 gave up the modest gains made in 2010.

Home prices are expected to remain soft for the next year until economic conditions improve and the excess inventory resulting from foreclosures declines. 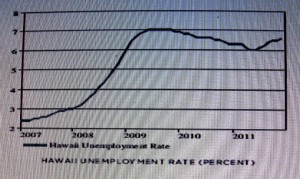 Labor market data confirmed fears that Hawaii’s job recovery had retreated. In December the seasonally adjusted unemployment rate rose to 6.6%. The number of unemployed workers rose to 41,900, not including the Hawaii Medical Center (HMC) layoffs.

Total unemployment claims continued to decrease in 2011 and overall are 17 % lower than in 2010, although recently they have ticked back up.

Federal unemployment benefits have continued through at least March 6, 2012. Both the program extension and the hospital layoffs will add to the total unemployment in the first quarter of 2012.

The payroll job counts, which come from a separate survey, ended the year with a modest 1.2% gain. The economists expect payroll jobs to expand by 1.8% this year and possibly by as much as 2.3% next year.  Because of backsliding, statewide unemployment is expected to average 6.2% in 2012 and 5.5% in 2013.

The largest job gains last year were in accommodations and food service and the large “other services” sector. This sector includes a variety of fields ranging from management to entertainment.

Jobs in utilities and transportation dropped 2.9%. UHERO expects this figure to turn positive during the year in part because of a recent and planned Hawaiian Airlines expansion.

Finance, insurance and real estate turned the corner. This sector is predicted to post a 3.6% growth in 2012.

If the drag caused by lack of construction employment eases, the combined retail and wholesale trade is estimated to expand by 1.5%.

Health care will be hit hard by the 1,000 HMC layoffs, and is anticipated to show no net job gains this year.

Public sector job losses have eased, but the report said they will make no significant net contribution to growth for the foreseeable future.

UHERO said that cuts in military spending are on the horizon, though Hawaii may be spared – or even possibly see incremental gains – as the military pulls back from overseas locations.

Personal income was disappointing in the first three quarters of 2011. Adjusted for inflation UHERO estimated that real growth was only a scant 0.5%. The report predicts better results for this year, due to the likely extension of payroll tax cuts and unemployment benefits which may be continued through the end of the year.

UHERO is cautiously optimistic that 2012 will be a somewhat better year and hopeful that the transition to a more satisfactory growth path will begin this year. 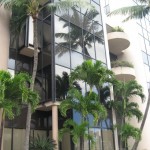 A History of Wailuku's Planning, Mismanagement 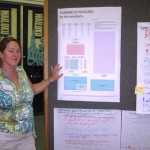