The Hawaii Department of Transportation (HDOT) will be updating the Regional Long-Range Land Transportation Plans (RLRLTPs) for the islands of Maui/Molokai/Lanai, Hawaii and Kauai and is asking the public to participate.

The RLRLTPs define land transportation goals and needs for each region and have not been updated since the late 1990s. Since then, the state of Hawaii has experienced significant changes in population, development, and travel needs.

On Maui, the public meeting will be held in Wailuku on Tuesday, February 21, 5:30 p.m. to 7:30 p.m. at the J. Walter Cameron Center. The HDOT will also be holding public meetings in Kona, Hilo, and Lihue in February and March to introduce the plans and receive input from the public.

“One of the key elements of this development process is community involvement,” said HDOT Director Glenn Okimoto, in a written statement. “The HDOT believes in effective community involvement to plan for Hawaii’s future land transportation, and thus the HDOT is moving forward with working with the citizens of Hawaii.”

The updated RLRLTPs will be incorporated into the Statewide Long-Range Land Transportation Plan (SLRLTP), which is being developed concurrently. The SLRLTP will embrace the overall values of the people of Hawaii and guide land transportation policy and programs within the state through the year 2035.

Once the drafts of the SLRLTP and RLRLTPs are developed later this year, another round of public meetings will be held on the neighbor islands to receive input on their respective RLRLTPs as well as the SLRLTP, and on Oahu to discuss the SLRLTP.

These meetings, in coordination with other outreach efforts, will ensure that all of Hawaii’s communities have an opportunity to participate in the development of the plans.

For more information, visit www.hawaiilongrangeplan.com or call the HDOT’s Public Affairs Office at 808-587-2160. 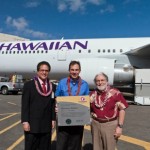