The state Department of Transportation is seeking the public’s help in stopping new thefts of copper wiring on the H-3 Freeway.

The incident was reported on the Halawa-side of the tunnels, near the Halawa Interchange.

As a result, the damage rendered all emergency call boxes and six traffic monitoring cameras on the Halawa-side of the tunnels inoperable.

Damage to the copper wiring and fiber optic communications has rendered all emergency callboxes and six traffic monitoring cameras on the Halawa-side of the tunnels inoperative. Control over electronic messageboards displaying tunnel lane closure information was also damaged on the Halawa-side. Photo courtesy Hawai'i Department of Transportation.

The copper wiring in several conduits was also cut but not taken.

Police reports have been filed and repairs to the wiring are pending.

Motorists who observe possible copper wiring thefts or suspicious activity are asked to call 9-1-1 and report the location to police immediately. 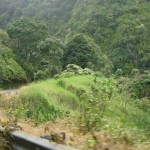