Closures and detours continue along the Kahekili Highway where a pavement rehabilitation project is underway.

The project began on May 25th, and is slated for completion in September 2012.

The work area extends along Kahekili between Puuohala Road and Makaala Drive.

A notice to motorists indicates that the Kahekili Highway will be closed to through traffic at certain times during the construction period–particularly on the upcoming weekend of June 9.

The road was closed today during the morning rush hour commute, resulting in congestion at both sides of the closure–in Happy Valley near the Takamiya Market, and in Waihee near Makaala Drive.

Motorists are advised to use caution, obey signs, and use alternate routes when necessary.

The project consists of excavating the existing pavement, installing asphalt concrete, replacing swales and guardrails, installing pavement markings, and installing signage in addition to other improvements. 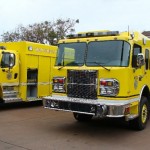