First, each pair performs together and then the group’s “four fathers” engage in a friendly competition with their kin. 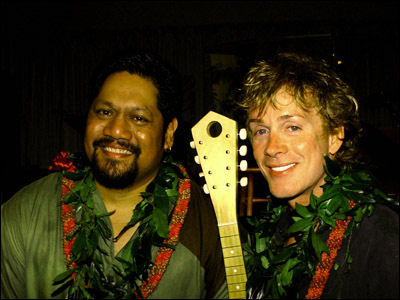 Hawaiian music duo HAPA is back on Maui to kick off summer with three June shows at Stella Blues.

HAPA is known for producing quality traditional Hawaiian music blended with some contemporary hints at American acoustic/folk. They have been on the scene for 20 years, and have attracted an international following with their talent.

The first show of the series is Friday night, where members Barry Flanagan and Ron Kuala’au will share a mix of traditional Hawaiian mele, oil, chanting, and slack key.

Alana’s powerful voice has a way  of getting everyone on their feet, so bring your dancing shoes and some cash for a drink or two.

Wavetrain Saturday, June 16 at 9 p.m. at Chatley’s Restaurant in Paia. Entrance is $10.

Grammy-nominated Maui musician Mark Johnstone, his band Wavetrain, and friends will play a summer concert at Charley’s this weekend.

Wavetrain‘s musical stylings include funk, blues, and a little bit of jazz.

The Reefers will open the show.

It’s the season for reggae shows on Maui and Ocean’s is hosting a good one this Saturday night.

Island-reggae bands Rebel Souljahz and Rising Strongare frequently featured in the Maui scene, and are bringing their talent to the south side to play their best hits.

Bands performing are The Satterday Saints, The Happy Haole’s, and Pounding Sunshine.

There’s no cover, so that leaves concert-goers with some extra spending money for some of Three’s tasty cocktails.

Spend Saturday by the pool with DJs, drink specials, pool games, a swimsuit contest, and prizes.

Live entertainment starts later in the day with Malino and Nuff Sedd.

This month’s Makawao Third Friday Town Party is themed “Summer Fest,” and will be the first Makawao Town Party where upper Balwin Ave. will be closed off to traffic.

Highlights include Haiku Hillbillies on the town’s Main Stage and a late-night party at Casanova’s starting at 9 p.m. with One Inity and Island Reggae.

Skimboard masters of all ages are invited to show off their moves at Makena Beach – the perfect place to slide on slippery, wet sands and spin into impressive skim tricks.

Wailuku’s Obon festival events include a remembrance service, traditional dancing, and free Maui chow fun. Dress in your finest kimono and carry a lantern as taiko drums beat into the night.

Come to Front Street on Saturday to celebrate Hawaiian culture and honor the Kamehameha lineage with a parade, cultural tours, exhibits, hula, crafts, and food booths.

A documentary on the Art of Pā’ū will be shown later in the day.

International Surfing Day is coming up, and to celebrate Surfrider Foundation Maui Chapter is having a community Launiupoko Beach cleanup with music from Kenny Roberts, food from Lulu’s Lahaina, and prizes for those who pick up the most trash.

Bring some gloves, a reusable bag, a drink container, and an appetite.

How To Treat Maui Dads On Father's Day