Flags Lowered in Hawai’i in Honor of Aurora Victims

Governor Neil Abercrombie today ordered that all national flags at all state offices and agencies as well as the Hawai’i National Guard are to be flown at half-staff as directed by President Barack Obama.

The declaration was made in response to the mass shooting tragedy in Aurora, Colorado.

Law enforcement authorities in Aurora said a 24-year-old man entered a movie theater during a midnight showing of a film, hurled a gas canister and then opened fire, killing at least 12 people, and leaving dozens of others wounded.

President Obama issued the proclamation today saying, “as a mark of respect for the victims of the senseless acts of violence perpetrated on July 20, 2012, in Aurora, Colorado” the United States flag shall be lowered to half-staff beginning today until sunset, July 25, 2012.

Hawai’i officials have also been responding to the incident with condolences.

US Congresswoman Mazie Hirono issued a statement today saying, “This is heartbreaking news, and I am truly saddened to hear of this deadly and senseless act of violence. It is particularly tragic to hear that young victims were likely involved. My thoughts and condolences go out to the families of all the victims, and I hope to see justice served.” 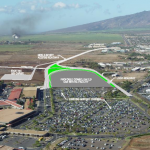