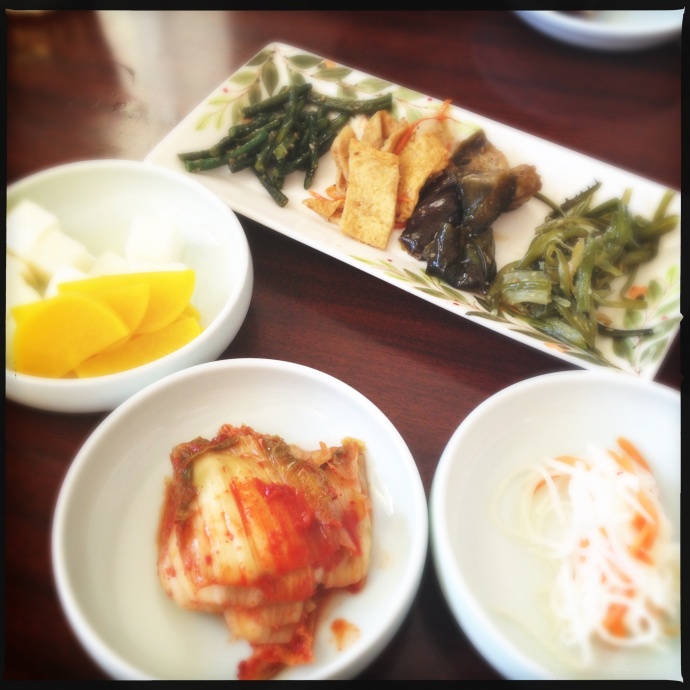 If you like Korean food, Ohana Karaoke Cafe & Grill Go Hyang Jip in Wailuku is – for the most part – a real find.

Despite its hole-in-the-wall exterior, it’s actually tastefully decorated and quite new-looking inside. Don’t be surprised to find that most of the clientele is Korean and there is a Korean soap opera on the TV. This is a good sign that authenticity is in the offing.

As a side note, Korean soap operas seemingly focus on the struggle to perform back-breaking housework and get good grades.

Upon seating, you will be left alone with the menu for a lot longer than you require, but eventually orders are taken. Complementary banchan and flavorless iced tea arrive soon after.

Banchan are the little appetizer-type dishes served before the meal in Korean restaurants. Over the course of three visits the selection changed each time, but always featured some incredibly good kim chee. It’s mystifying why some kim chee is so much better than others. But this one is of the highest caliber.

The banchan arrives in generous portion and most of it is quite delicious, or – at the very least – interesting. 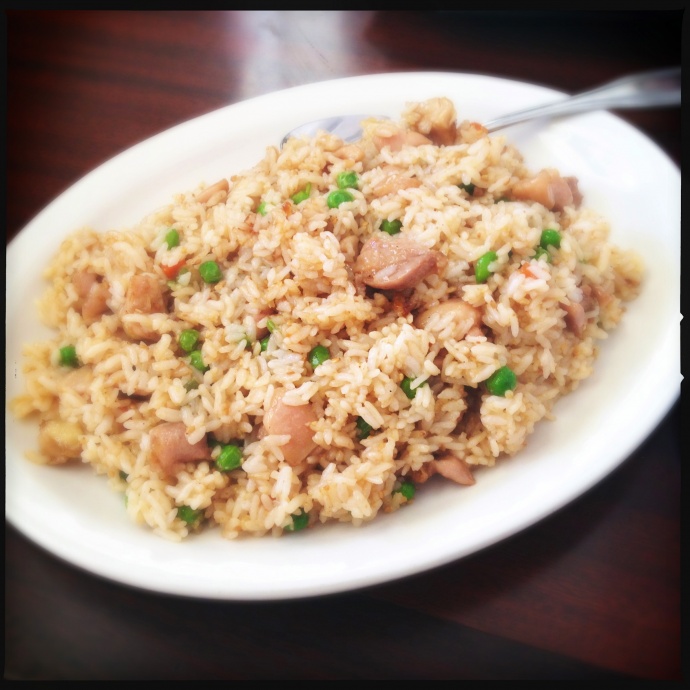 “Generous portion” is a theme which helps to offset the “spendy for Wailuku” prices. The Chicken Fried Rice ($12) is pretty basic, made with just rice, peas, carrots, chicken thigh meat and a heavy burned garlic flavor. It’s also rather oily, yet somehow we couldn’t stop eating it after applying a little soy sauce and dolling it up.

The menu provides little to no information on the dishes, prompting daring attempts at ordering intriguing-sounding mystery items.

We tried to take a crack at the Spicy Blue Crab Mix With Vegetable ($17) but if we understood the waitress’ broken English correctly, the crab is served raw. Whether or not that was the intended message being conveyed, definitely some sort of alarm and seeming concern for our welfare was at play. We recognized the signs of danger and backed down. 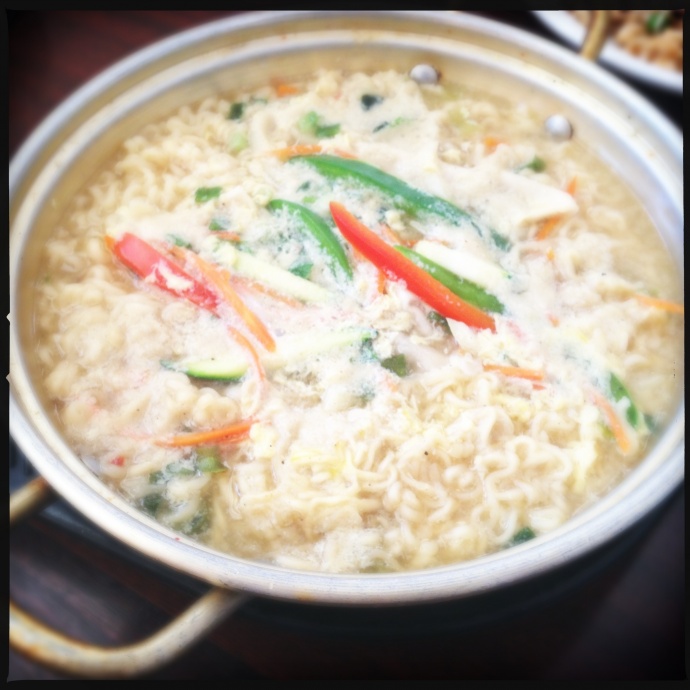 The Ramen with Dumpling soup. Photo by Vanessa Wolf.

Same thing with the Korean Hangover Soup ($12). It sounded exotic and like a potentially fun future story about how one comes to accidentally eat a bowl of grubs, but no. Hard to call for sure whether they refused to take the order or merely instilled enough fear to scare me away, but a look was given that can only be described as pure terror.

Wikipedia reports Korean Hangover Soup is made of Napa cabbage, beef broth and congealed ox blood. So there you go.

The Dumpling Ramen Soup ($8) procured instead was savory and thick with egg. It seemed to rest on a chicken broth base. There were pork gyoza along with the ramen noodles and a few carrot, bell pepper, and zucchini slices. Garlic makes a showy appearance and the flavor overpowers. 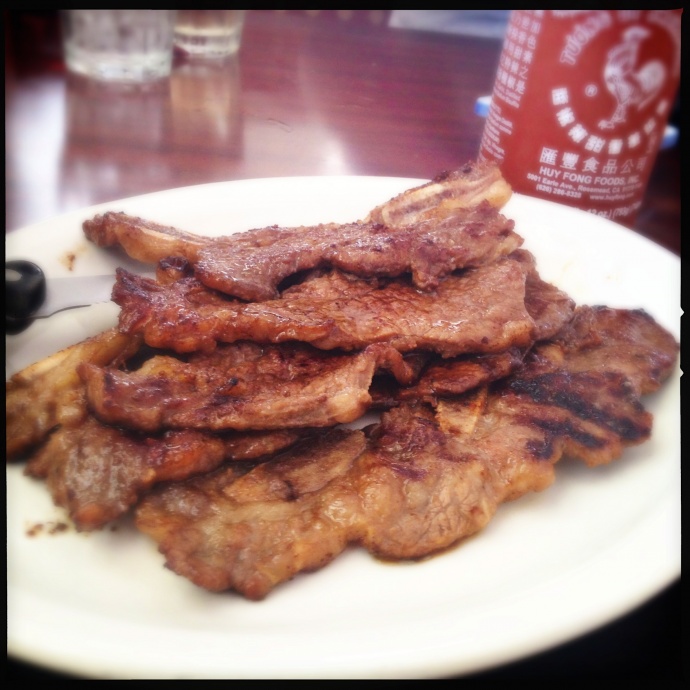 The Kalbi. Consider bringing your own fork or bib for this one. Photo by Vanessa Wolf.

The Kalbi ($16) was tender with an excellent contrasting sweet, grilled taste.

Eating it, however, proved a challenge.

We were provided with a steak knife and chopsticks. The combination is an advanced skill far beyond my level. When ladylike “stab and cut” efforts failed, our dining companion gave up and went at the plate like a caveman. Plan to get messy and look a bit uncivilized in the process.

Having once gotten sick on a bad Bibimbab ($12), my voice shook a little while ordering it. However, such concerns were unnecessary.

It arrived with a small bowl of kimchee soup, which was amazing. Hot, sour, and savory all at once: a kaleidoscope of yes.

Being accustomed to Dolsot Bibimbap (the one in the stone bowl so hot it cooks the rice, a la paella), there was a little disappointment when this one came out in a cold metal dish.

Just because it made you violently ill once doesn’t mean you can’t still be a loyal fan. 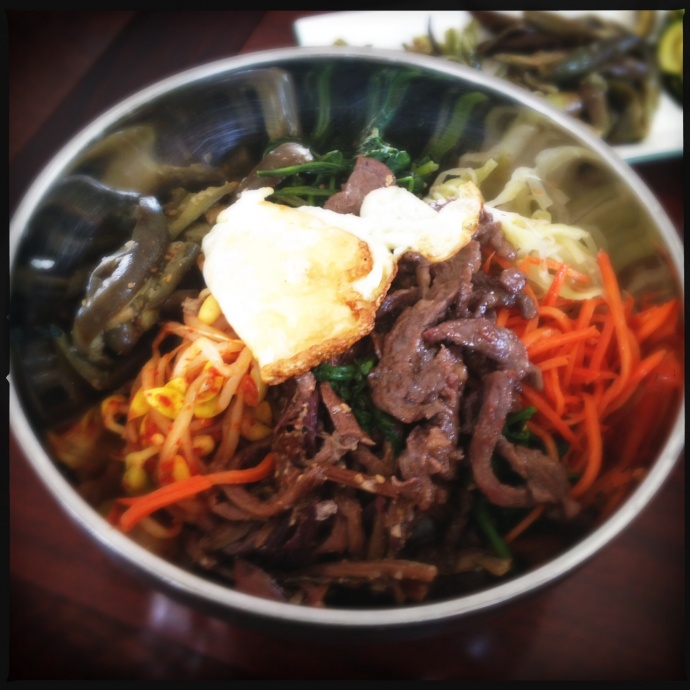 The Bibimbab (per the menu) or Bibimbap or Bibbitybobbityboo if you want to be confusing. Photo by Vanessa Wolf.

Still, the flavors of the Ohana Karaoke version were on point.

A generous portion of rice arrives covered in a veritable rainbow of toppings: carrots in sesame oil, sautéed pea shoots, bean sprouts with hot chili sauce, pickled cabbage, gosari (cooked fiddlehead fern and not a favorite: get ready to dig it out of your teeth. Wikipedia reports it may cause cancer. Yikes.) sautéed beef, and a slightly over-fried egg on top.

The resulting mix of flavors are all over the place: one bite reminiscent of what dog food smells like, the next transcendent.

Service is friendly, but can be wildly inattentive.

The two ladies running the front of the house are quite possibly also holding up the back. Eventually one becomes so thirsty you begin to consider going into the bathroom and drinking from the tap.

Still, if you’re a fan of Korean food or merely curious about that hangover soup, bring your own bottle of water and give Karaoke Cafe & Grill Go Hyang Jip a shot. 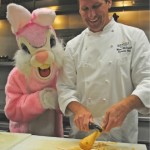 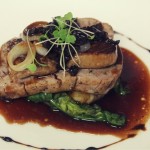