A brush fire in Waiehu came within 50-feet of a home and church before being brought under control and extinguished on Friday night, fire officials said.

Maui fire Services Chief Lee Mainaga said the fire crews from Wailuku and Kahului quickly brought the fire under control by 4:54 p.m., and extinguished the blaze by 5:30 p.m.

No monetary losses or injuries were reported and the cause of the fire is still being investigated, said Mainaga. 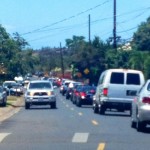