The fire was first reported at 3:49 p.m. near the entrance of the road that leads to the Dunes at Maui Lani Golf Course maintenance building, according to a fire department officials.

Maui Fire Services Chief Lee Mainaga said the fire, consisting of dry grass and brush, was called under control at 4:13 p.m., an was extinguished by 5:16 p.m.

No damages or injuries were reported, and the cause of the fire is undetermined, according to FS Chief Mainaga.

Crews responding to the scene included units from both Kahului and Wailuku.

The fire is the second to be reported near the course over a two week period.  On Friday, April 26, a brush fire was reported just down slope of the Hospice Maui building, between the Maui Lani golf course fairway and Mahalani Street. 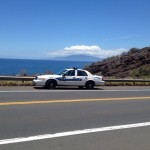