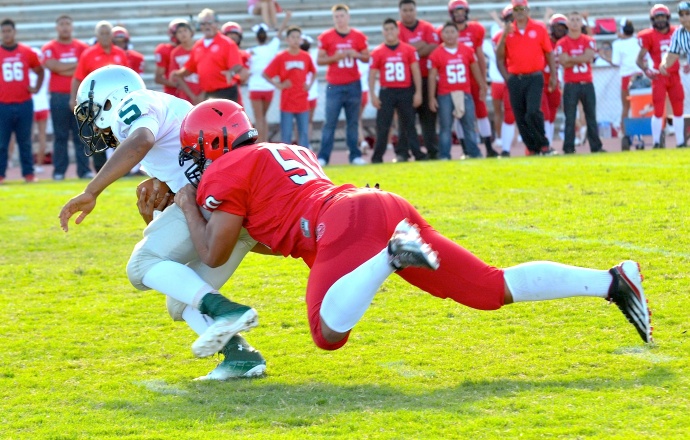 The Lunas exploded for three first-half touchdowns, two coming on impact plays by defensive veterans Hercules Mata’afa and Kiko Kolher-Fonohema, as the state’s Division II runner-up from last year opened the 2013 season with a 28-13 victory over Kapaa of Kauai.

As one of the most well-travelled teams in the state, the Luna faithful dominated the crowd of about 1,200. The nonleague game enjoyed a matinee start at 4:30, following a junior varsity game between the same schools that Lahainaluna won 15-0.

“From what I’ve seen on film and from what I’ve always heard is Lahainaluna is well coached,” said Kapaa head coach Kellii Morgado. “That is apparent. We saw that today. What you can’t see on film is how big and athletic they are. How physical and fast they are. They are literally a class above us physically and I’m not sure what happened to our guys emotionally when we got down. We gave them 14 points right off the bat and we loss by two scores at the end. I can accept that. After our emotional letdown to start off with we battled with an excellent football team.” 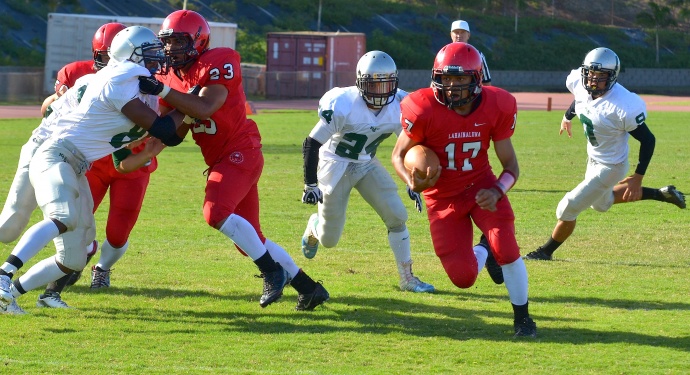 Running back Christian Whitehead (17) scores the Lunas’ first offensive touchdown of the season on this 11-yard run behind the block of Jared Rocha-Isalas (23) Saturday against Kapaa. Photo by Rodney S. Yap.

Mata’afa, the MIL’s marquee recruit from the class of 2014 with five Division I scholarship offers already, wreaked havoc in the Kapaa backfield with three sacks a fumble returned 34 yards for touchdown on the first play of scrimmage.

Kolher-Fonohema showed the athletism that helped him record the MIL’s second best SPARQ rating (93.84) over the summer when he intercepted Kapaa quarterback Fresno Masaniai and bolted to the end zone down the home-team’s sideline 81 yards.

“We gave up a lot by giving away those first two scores,” said Masaniai, who was sacked nine times and finished with 14 rushes for minus-57 yards. “We have to execute better, and for my part, I was holding on to the ball too long, I need to get rid of it quicker.” 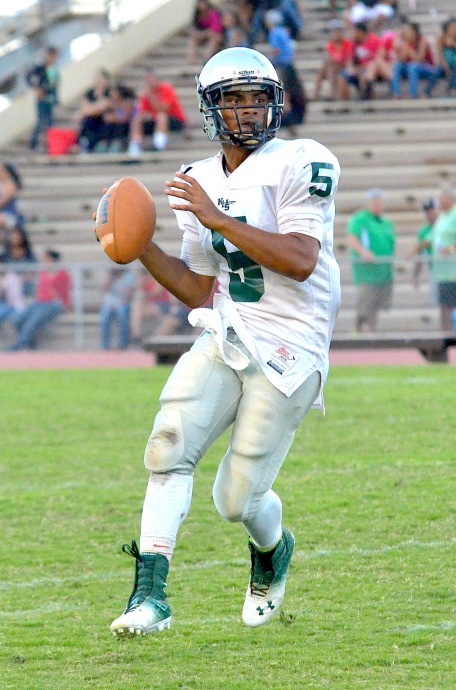 Quicker, because Lahainaluna defensive tackle Connor Mowat was the only player beating Mata’afa to the ball in the Warrior backfield. Mowat, arguably the MIL’s best overall lineman, finished with 2 1/2 sacks of his own. The junior center and two-time MIL all-star will be hard pressed to stay under the defensive radar from here on out.

Masaniai said the Lunas’ pass rush is better than advertised with Mowat and Connor Rosen-St. John.

“Wow, that’s another story. They are bad ass,” said the 5-foot-9, 190-pound senior signal-caller. “I’ve never seen anything like that. They got a lot of pressure on me. Hercules is quick, very strong and technically sound.”

“This game was a great lesson for us,” said Masaniai, who connected with Turtle Kuhaulua on a 4-yard scoring toss to open the second half. “This will be the hardest game we will get this year. We have to work hard to get through the KIF and hopefully make it back (to state).” 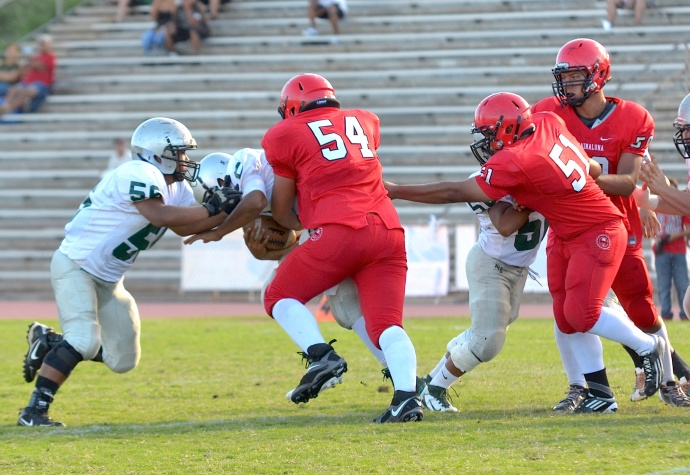 Lahainaluna capped the scoring midway through the third quarter when quarterback Makoa Filikitonga broke off a 68-yard touchdown run on an option play.

“We left three scoring opportunities on the field and that’s a tribute to their defense,” Morgado said. “But to be a good team and to be at their level you have to take advantage of those turnovers and we didn’t. But they didn’t allow us to.”

The Warriors’ defense did hold the Lunas to just five first downs. Morgado said considering the opponent, he is pleased with his team’s progress. Last week, Kapaa rolled over Nanakuli 56-12.

“Our offensive line is young, we have four rookies and they were facing that front, which is got to be one of the best in the state. They were getting killed for three fourths of the game, but for that one fourth when they hunkered down and fought, I’ll take that. That is all growth and progress for us. I thought our receivers were being smart catching the ball in windows, and I thought the quarterback showed plenty of composure. Defensively, we played like a unit very well. Against a team like that, I’ll take it.” 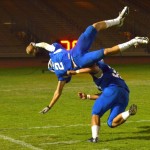