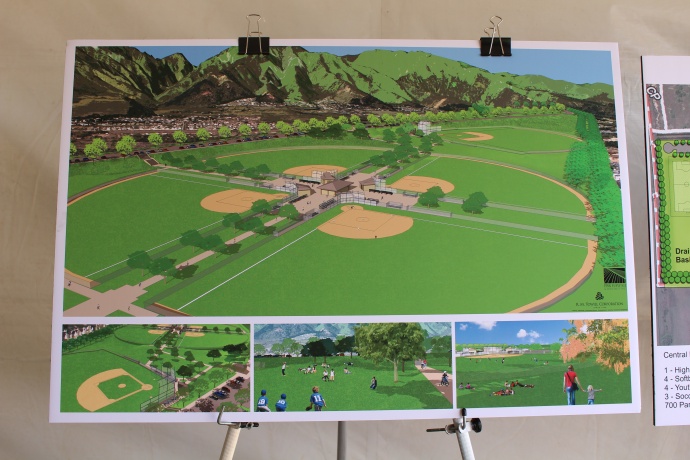 A non-profit organization representing a group of Central Maui homeowners filed a lawsuit in Second Circuit Court on Tuesday challenging the legality of the Central Maui Regional Sports Complex project now under construction in the Waikapū-Wailuku region.

The lawsuit alleges failure to follow environmental, planning and zoning laws, and seeks injunctive relief from approving or carrying out the Sports Complex uses unless and until the project has achieved full compliance to correct alleged violations. 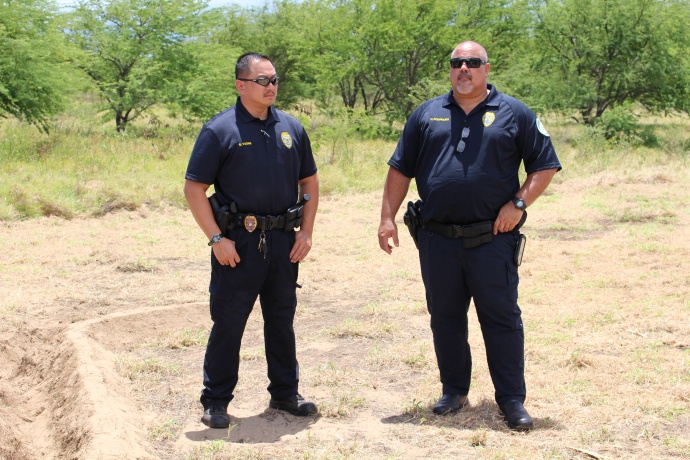 State enforcement officers with the State Department of Land and Natural Resources were on scene during the groundbreaking ceremony for the Central Maui Regional Sports Complex, held on July 31, 2014. During the event, a small group of protesters opposed to the project held two banners claiming the project was illegal. They have since filed a lawsuit in Second Circuit Court. Photo by Wendy Osher.

As a result of the alleged violations, the suit claims the public was denied “their rightful opportunity” to comment and have a “meaningful voice” in the process.

The lawsuit further states that “public streets within Maui Lani were never designed to handle the additional traffic from the Sports Complex, and are already deemed to be overcapacity and operating at the lowest level of service used by traffic consultants.”  The document claims the additional traffic “constitutes a public nuisance.”

In July, Maui Lani Neighbors sent a letter to developers of the project, the state Department of Land and Natural Resources, and project proponent Lieutenant Governor Shan Tsutsui, demanding that development efforts cease, alleging violations of state and county law.

“The state’s refusal to specifically respond to the numerous violations cited in our cease-and-desist letter, and our concerns regarding the serious impacts to the surrounding neighborhoods, left us no choice,” said David Potter, President of the Maui Lani Neighbors Board in an organization press release. “Even if the sports fields are needed, it doesn’t justify violating our land use laws, which are supposed to ensure developers, including the state, adhere to the county’s planning documents,” he said.

A groundbreaking ceremony for the project was conducted on July 31 at the 65-acre parcel.  Plans call for the construction of a high school baseball field, two softball fields, a comfort stations, a concession stand, parking, landscaping, an irrigation well, and storage tank.  Phase 1 of the project will cost approximately $14.8 million, with an additional $5 million appropriated in fiscal year 2015 for future phases of the park.

During the event a small group of protesters holding two hand-made banners stood in opposition to the project claiming it was illegal.  Dignitaries who spoke at the event addressed the protesters with a commitment to continue to address concerns raised.

Last week the state Department of Land and Natural Resources issued a press release announcing that construction would start on Tuesday, Sept. 2, 2014.

The complaint described the parcel as a “narrow piece of land” saying it is “inappropriate” for this regional park use, especially since the Maui County Council identified a separate 209 acre parcel further south from the Sports Complex, for use as park space.

In the organization press release, Maui Lanai Neighbors board member Kela Gannon said, “I am not aware of a single homeowner who is against having more sports fields for athletic teams here in Central Maui.  What we are against is the State using its political power to get around the law and force the poorly planned project into a very bad location.”

Maui Planning director William Spence said he had not seen the lawsuit, and as a result it would be in appropriate to comment.   Maui Now also sought comment from the County of Maui, but officials said they could not speak about pending litigation.

Lieutenant Governor Shan Tsutsui also declined comment; and a request for input from the state Department of Land and Natural Resources, was not returned by our publishing timeline. 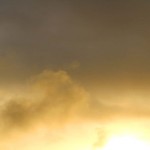 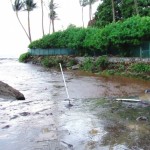