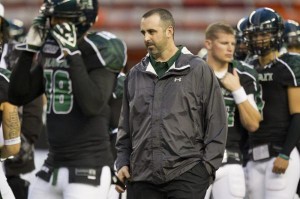 Nick Rolovich, 36, will be formally introduced as the new University of Hawaii head coach Monday at a campus press conference. AP file photo.

University of Hawaii has hired Nick Rolovich, a former quarterback for the Warriors, as its new head football coach, the school announced today.

Rolovich, who graduated from Hawaii in 2004 and serves as Nevada’s offensive coordinator, replaces Norm Chow, who was fired earlier this season.

Rolovich, 36, is expected to be introduced at a campus press conference on Monday.

Nevada coach Brian Polian said of the hire, “We were thrilled to learn today that Nick Rolovich has been named head football coach at the University of Hawaii. This is a well-deserved opportunity for Nick and his wonderful family. We will miss him professionally, but even more so as a person. UH made a great decision.

“Both Nick and UH have been transparent throughout the whole process and I appreciated that very much. I am confident that his candidacy did not affect our preparation for SDSU. We will handle any decisions regarding the staff internally and make those decisions known when the time is appropriate.” 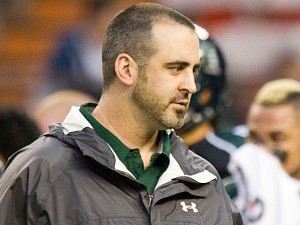 Hawaii athletics director David Matlin said, “I’m pleased to welcome back Nick Rolovich to the UH ohana. Nick is a Warrior at heart and someone I know our fans will support. He understands what it means to be a Warrior having played and coached here and what affect a winning program has with this community. I have no doubt we picked the right man for this job. The future is bright for Hawaii football.”

Rolovich said, “Being raised a Warrior, there is a great sense of excitement and responsibility about bringing back a winning tradition to Hawaii football.

“I can’t wait to get started. I’m honored to be selected to run this program which has made me into the man I am today.”

The other finalists interviewed for the position were Rich Ellerson, June Jones, Rich Miano and Brian Norwood, all of whom have UH backgrounds. 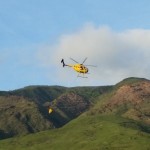 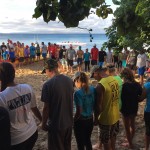