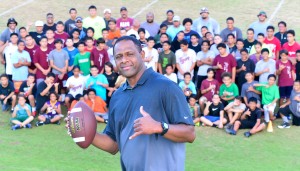 Coach Jack Damuni shared this final picture with the players and coaches of the Wailuku Big Boyz team Friday at the Pit Field. Photo by Rodney S. Yap.

According to the life of Jack Damuni, people should never underestimate the power of a dream.

And that goes for guys pushing 50, too. Reality is you’re never too old to make a dream come true.

The familiar voice confirming his hire was that of boyhood friend and newly named Cougars’ head coach Kalani Sitake.

“For me it’s exciting,” said the 50-year-old former BYU safety, who met his wife, Shalei, in Provo. “They were the first school to give me my college opportunity 25 years ago when I got a Division I scholarship to play football. And ironically,  25 years later they are giving me another shot . . . I am so excited.”

The Wailuku Big Boyz players and coaches pose with Jack Damuni (middle) on his last day of practice, Feb. 5, at the Pit Field. Photo by Rodney S. Yap.

So the substitute teacher, who on any given weekday can be seen walking the hallways at Baldwin or Iao schools, is returning to his alma mater Monday to be officially introduced as the Cougars’ next director of player personnel. A position Sitake picked Damuni to fill based on Jack’s people-person skills versus his X’s and O’s IQ.

Although the two grew up in Laie and attended Kahuku High School, Damuni was not thinking about a possible reunion, professionally or otherwise, when he called Sitake on Dec. 19 to congratulate the former BYU fullback who ran the ball for four years at BYU (2000) and the first FBS collegiate football coach of Tongan descent. 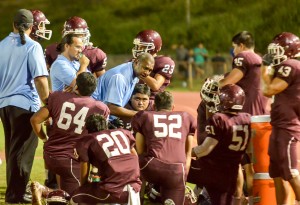 “Several of my friends and family called me to tell me of a job opening at the school and they were all encouraging me to apply. Some were even congratulating me and I didn’t have the job yet.

“So I called him and he was shocked that I was even interested and that I would move from Maui. I said if the job was available and if I got it, I would move. And right off the bat he said, ‘I want you here.’ “

Hours after Damuni talked with Sitake on the phone he boarded a plane so he could attend National Signing Day and share in the excitement of the 2016 recruiting class that consisted of 23 prep signees and two junior college transfers.

“I bleed blue,” Damuni said. “I am a rise-an-shine BYU guy. This one hits home and I had to take advantage of it. It’s not just for me, it’s for my family.” 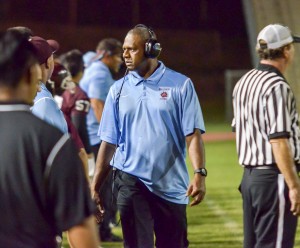 Baldwin head coach Pohai Lee said when got hired at Baldwin last year, Jack was the first coach he called.

“When you come into a head coach situation you kind of want the best people around you. We kind of go way back, even through we are St. Louis-Kahuku. He’s a great guy, a great friend. We were fortunate that he came aboard.

“He’s done a great job working with the kids, and I don’t mean just now, I mean all these years,” Lee added. “His imprint is going to be felt long after he leaves. We’re going to miss him, but at the same time we are happy for him and he’s very deserving. Hat’s off to him, we wish him the best of luck, we know he’s going to do well, no doubt.”

As director of player personnel, Damuni will be required to help players develop life skills, social skills, transition to marriage, or how to take advantage of the different resources available on campus.

“It’s really about helping players develop and taking care of their little needs here and there. It’s a start and I’m so grateful for that.”

Damuni is Sitake’s newest hire and the ninth staff member who played and graduated from BYU. The influence of the Cougars’ legendary coach Lavell Edwards figures to boost the program. 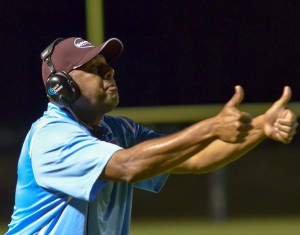 Damuni is no stranger to saying goodbye and changing his address. In 2011 he took a job at Mesa Community College in Arizona, where he coached defensive backs and helped five Maui Interscholastic League players transition to the junior college.

Damuni’s decision to move to Phoenix was easy when you consider how difficult it is to break into the college coaching ranks. So when his former Dixie Junior College coach Greg Croshaw called for help, it was a no brainer, Damuni said. Plus, he was fond of the junior college experience, having to make his mark and in Dixie in Utah and earning first-team all-conference honors before finally getting scholarship offers from BYU, Hawaii, California and Arizona State.

“After that I got a chance to go Weber State University, but when I called my wife, she said, for whatever reason, it just didn’t feel right.”

This time things are different, Damuni said: “This one feels right.”

“I met my wife at BYU so it’s both of our alumni, so we are both excited about the position. We’ve been waiting, it’s been a long wait. It’s been three weeks and we’ve had to let things play out. That’s just how BYU does things — they do it really carefully. It’s been an interesting ride, but we’re glad its over.”

Damuni’s wife, Shalei, teaches at Kamehameha Maui and their children, Selai, Raider and Silina are all enrolled at the Upcountry school. Drayson graduated from the Maui campus last year and is now in American Samoa serving his two-year Latter-day Saints church mission. 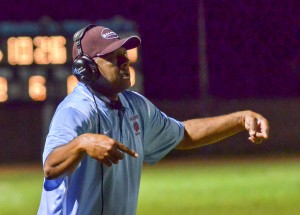 Over the three-week waiting period, the Damunis have had a lot of time to talk about the different scenarios the family  will soon be facing as a result of Jack’s departure.

“The one thing I am very grateful for is my wife. She’s alway been very patient and has sacrificed a lot. I owe all my success —  everything that I have done —  to her. Even when I started this Big Boyz League I had to get her approval and she was really fine with it.”

For now, Damuni said the plan is for Selai to stay here for her senior year.

“She wants to end her volleyball career here. She wants to play again for coach Balla (Spencer) and hopefully win another MIL championship. So my wife and I are very respectful of that so we made the decision that my wife would stay with her until she finishes out her senior year. I have a lot of family and friends in Utah and of course I can always fly back if I need to. 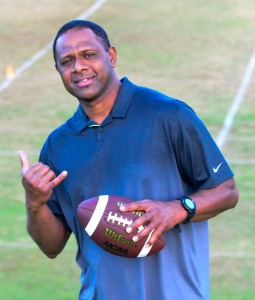 Jack Damuni will be the new director of player personnel at BYU in Provo, Utah on Monday. Photo by Rodney S. Yap.

“As far as Raider, it looks like I’m going to take him with me to Utah. He’s going to be a freshman next year so he’ll probably start high school there. Plus, there are more opportunities up there for him.”

Damuni, who has almost 5,000 friends on his Facebook page, has positively impacted hundreds of kids from Maui since his arrival 20 years ago. He has coached with Curtis Lee, Joe Balangitao, Chad Kauhaahaa, Jimmy Morimoto and most recently Keneke Pacheco and Pohai Lee. He was the first to bring Speed & Quickness clinics and camps here and spent seven years training athletes for free.

A Polynesian dancer since he was five, Damuni is also bidding aloha to his Old Lahaina Luau family.

“I’ve been so complacent living on Maui. Everything is just so comfortable with me, so it’s like a bittersweet move.”

“This is my home,” he concluded. “I love everything about living here and I love the people I’ve work with — they have all been influential in my life.” 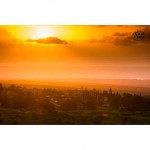 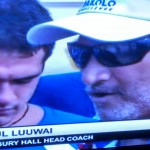