Wine dinners, we’ve heard all about.

But beer dinners? Not so much.

Well, the head of Maui Brewing Co. says it’s time we listened up.

“We’ve been screaming it from the rooftops for years,” says Garrett Marrero, founder and CEO of Maui Brewing Co. “It’s really starting to take hold. It offers a unique experience, usually one that’s a little cheaper than what a wine dinner would be.”

Maui Tastemakers Series features an intimate, five-course dinner every other month.  It connects Japengo’s top cuisine with quality local producers; on Friday, April 8, Maui Brewing was on the menu.

“As chefs, we’re so used to pairing wine with food. So beer and food, it’s fun,” smiles Utrillo.

Besides, have you ever had a beer Mai Tai? It was the drink that welcomed guests to dinner, in its own private room at Japengo in Kā’anapali.

The light cocktail with a hint of bubbles was made with Mana Wheat beer, orgeat syrup and pineapple juice with a float of CoCoNut PorTeR on top.

“It shows you that craft beer is about so much more than just fizzy yellow stuff that most Americans are used to,” Marrero says.

Maui Brewing also showcased a new brew, Hop Kine India Pale Lager, complete with a cool can design. It’s brewed in the style of an India Pale Ale, but includes lager characteristics. Since IPL is not (yet…?) an official style of beer, it allowed brewers to get creative and make the beer lighter, at 5.7% alcohol by volume (ABV) compared to 6.5% ABV for a typical IPA.

All the featured beers, other than the Mai Tai, were lagers.  That included a schwarzbier, or black beer, aptly named Black Rock Lager.  While it’s available on the market now, it wasn’t always.  The beer was originally custom-crafted for Sheraton Maui’s Black Rock Lounge.  Marrero found a unique way to introduce the beer to resort leaders, who wanted something “light and easy to drink.”

“We made them drink it first with their eyes closed; they loved it! Then they opened their eyes and said, ‘Oh my God, it’s a dark beer!’ It’s a bit of an education about beer as well, that not all dark beer is heavy,” he says.

Marrero tips his hat to the wine industry, saying it’s done a good job educating the public about which wine pairs best with what food. Now, beer wants a place at the table.

For instance, Marrero says one of his company’s beers, Pau Hana Pilsner, can serve as a palate cleanser when paired with dishes like raw fish. He calls it “the scrubbing bubble effect,” activated by a fizzier beer with more carbonation, which stems from the carbon dioxide (CO2) created in brewing process.

“Hold the beer on your tongue and you feel it fizzing or almost burning, that is a higher Co2 beer,” he explains. “It’s really lifting the oils from the raw fish in that dish off the tongue, allowing you to have a fresh palate and taste that next bite.”

Chef Utrillo incorporated Maui Brewing’s own root beer into the lamb demi glace. Utrillo, by the way, grew up in Lahaina, trained and worked on the mainland, then made his way home to raise his family.

Japengo was just honored with three 2016 ‘Aipono Awards: Gold for Best Asian, Gold for Best Sushi and Silver for Restaurant of the Year.

“It’s not your standard chow fun; there are scallops in there, crab legs, Kauai shrimp in there,” Utrillo explains.

Despite its long list of awards and upscale, quality cuisine, Japengo’s chef describes it as more of a casual spot, with open-air, oceanview seating and live lounge entertainment.

“We’ve got people who come up straight from the pool in their shorts and slippers, just kicking back in the lounge listening to the live music we have every night,” says Utrillo. “It’s great for families, it’s great for celebrations, it’s great for everybodyl” 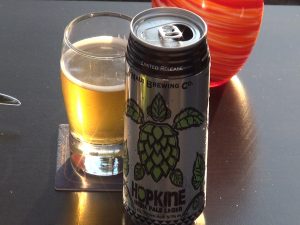 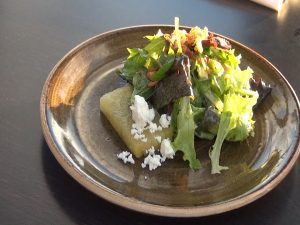 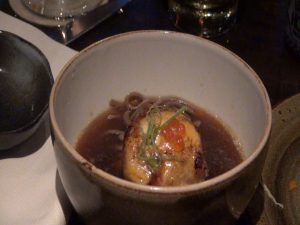 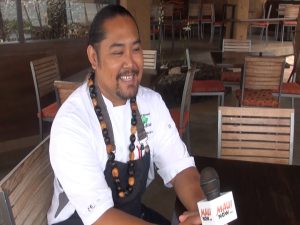 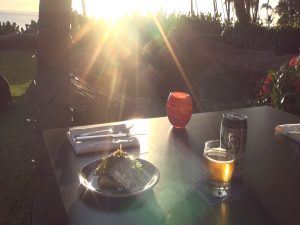 Food and beer at sunset at Japengo. Photo by Kiaora Bohlool. 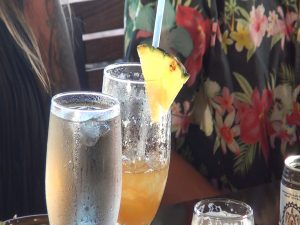 Mana Mai Tai, made with two types of Maui Brewing Co. beer, among other ingredients. Photo by Kiaora Bohlool. 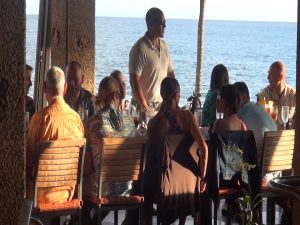 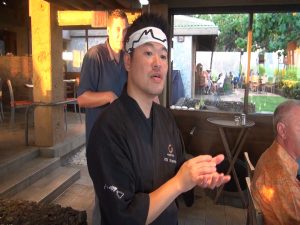 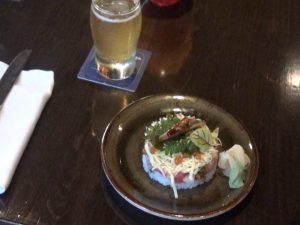 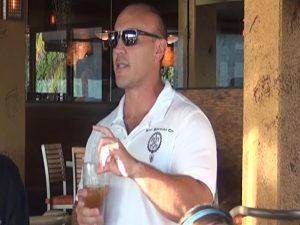 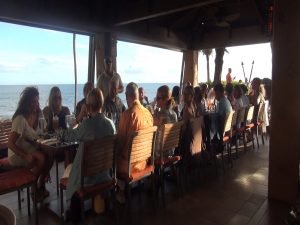 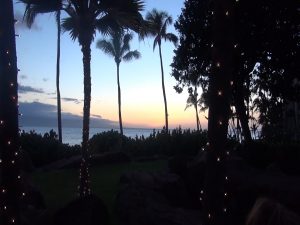 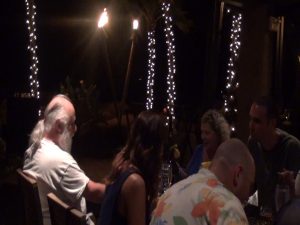 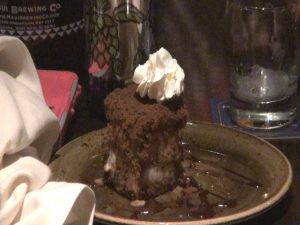 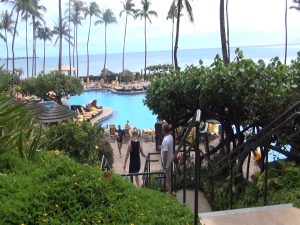 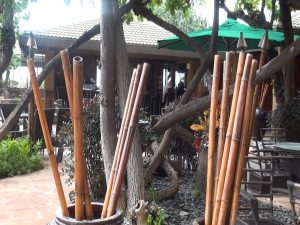 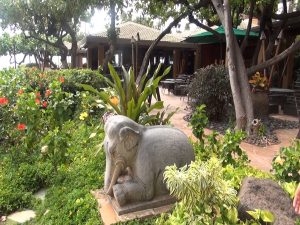 Statue on the grounds of Hyatt Regency Maui. Photo by Kiaora Bohlool.

Meanwhile, Tastemakers goes from 5:30 to 7:30 p.m., sometimes a little later as friends are made and conversations continue. The intimate table is set for a limit of 25 diners in a private room.

The last course, dessert, deserves a special mention, because of its name: Megan’s Pie, which Utrillo coined for his daughter, incorporating Thin Mint Girl Scout Cookies into the crust, joining a mix of frozen bananas, macadamia nut ice cream and Kona coffee sauce.

“She was excited when she saw the menu came out, she was like ‘Oh look! For me, for me!,’” he laughs as he tells the guests.

The dessert beer includes a little history lesson. It’s called Doppelshot Doublebock, and includes Maui-grown coffee. It’s a strong 8.2% ABV, but there’s an interesting reason why. It was traditionally brewed by Lenten monks, nine centuries ago.

“They would brew this beer during Lent because they needed sustenance to do their work at the monasteries,” Marrero explains. “So while they were working, it wasn’t that they didn’t eat; their sustenance was derived from a high-carboydrate beer, Doppelbock.”

This Tastemakers dinner cost $90 per person, and prices vary depending on the event. Future Tastemaker dinners will feature Ocean Vodka on June 3 and Kona Brewing Co. with Simpli-Fresh Produce on August 12. 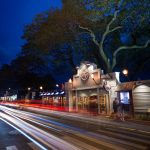 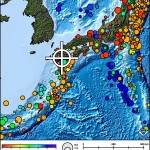