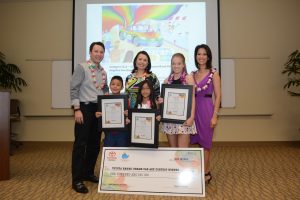 Justice Wakamatsu, age 6, a student at Pu‘ukukui Elementary School, was awarded $100 as a finalist in the People’s Choice Award category for keiki ages 7 and under in Toyota Hawai‘i’s 2016 Toyota Dream Car Art Contest.

Toyota Hawaii announced the local finalists and additional People’s Choice Competition winners in two other age categories (see below) at an awards ceremony held over the weekend.

From Feb. 15 to 28, 2016, Toyota Hawaii’s Facebook friends had the opportunity to view all eligible entries and vote for their favorites in each of the three age categories for the People’s Choice Competition awards.

The Facebook contest received an overwhelming response of 6,105 votes and 5,791 unique visitors to the contest page. The three finalists were automatically entered for final judging in the local competition.

Among the hundreds of entries received, nine works of art (three from each age category) were selected to move on to the Toyota MotorCorporation World Contest in Japan.

“We received hundreds of creative works of art,” said Glenn Inouye, senior vice president representing the Toyota Hawaii dealers. “Family and friends really rallied for their loved ones as well by voting for their favorite entries in the People’s Choice Competition on our Facebook page in February.”

These entrants were awarded $100 cash and were automatically entered for final judging in the local competition for receiving the most votes in each category.

This international art contest was established in 2004 with the goals of creating an opportunity for children to have fun and to understand the importance of having a dream, while at the same time to encourage them to become interested in cars through drawing their “Dream Cars” using their creative imaginations. 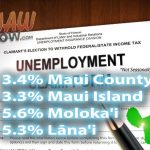 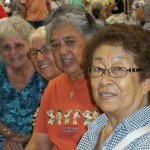