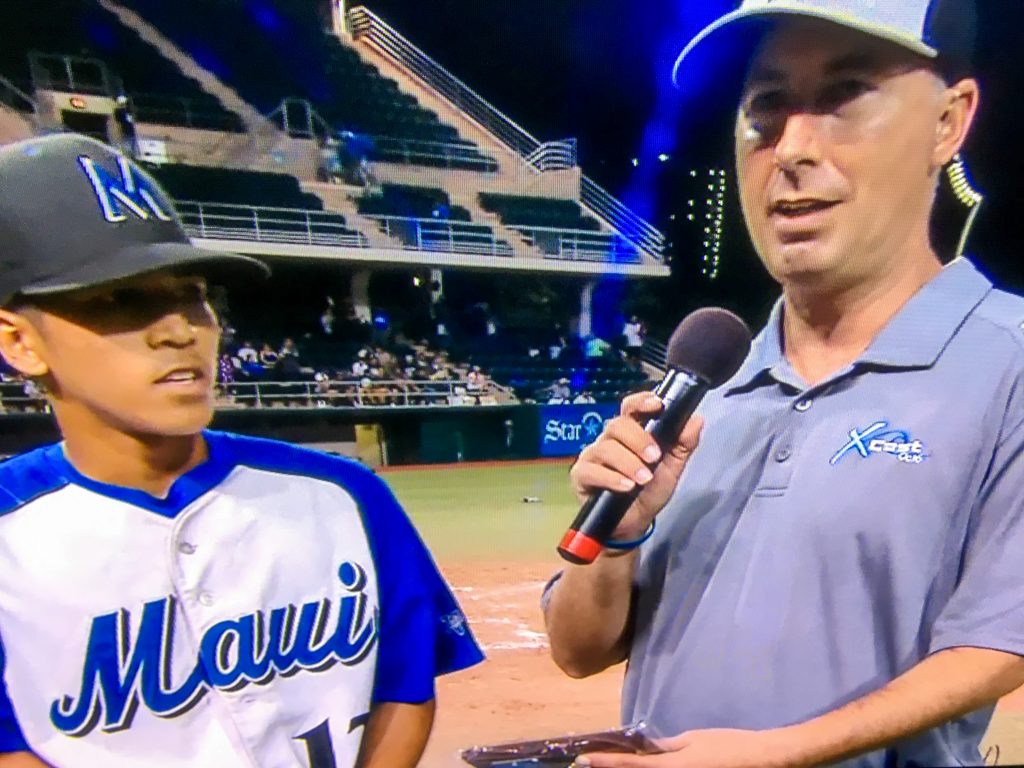 The Maui High School baseball team rallied for four runs in the bottom of the sixth inning Friday to beat Campbell 6-4 in semifinal action of the 2017 Wally Yonamine Foundation Division I State Baseball Tournament at Les Murakami Stadium on Oahu.

The last time the Division I championship was an all-Neighbor Island final was 2012 when Waiakea beat Baldwin 5-2 to claim its first Hawaii High School Athletic Association State Baseball Championship. The Warriors fell short against Iolani, 4-1, in they’re only other championship final in 1996.

Saber shortstop Jyrah Lalim delivered the winning hit — a bases-loaded two-run double down the left-field line — in the bottom of the sixth inning, trailing 4-2. The Maui Interscholastic League runner-up exploded for four runs on six hits in that big sixth inning, and relief pitcher Mikito Barkman got Campbell to ground out, fly out and pop out to end the game.

For his stellar play, at the plate and on defense, Lalim was chosen the OC16 Impact Player of the Game. 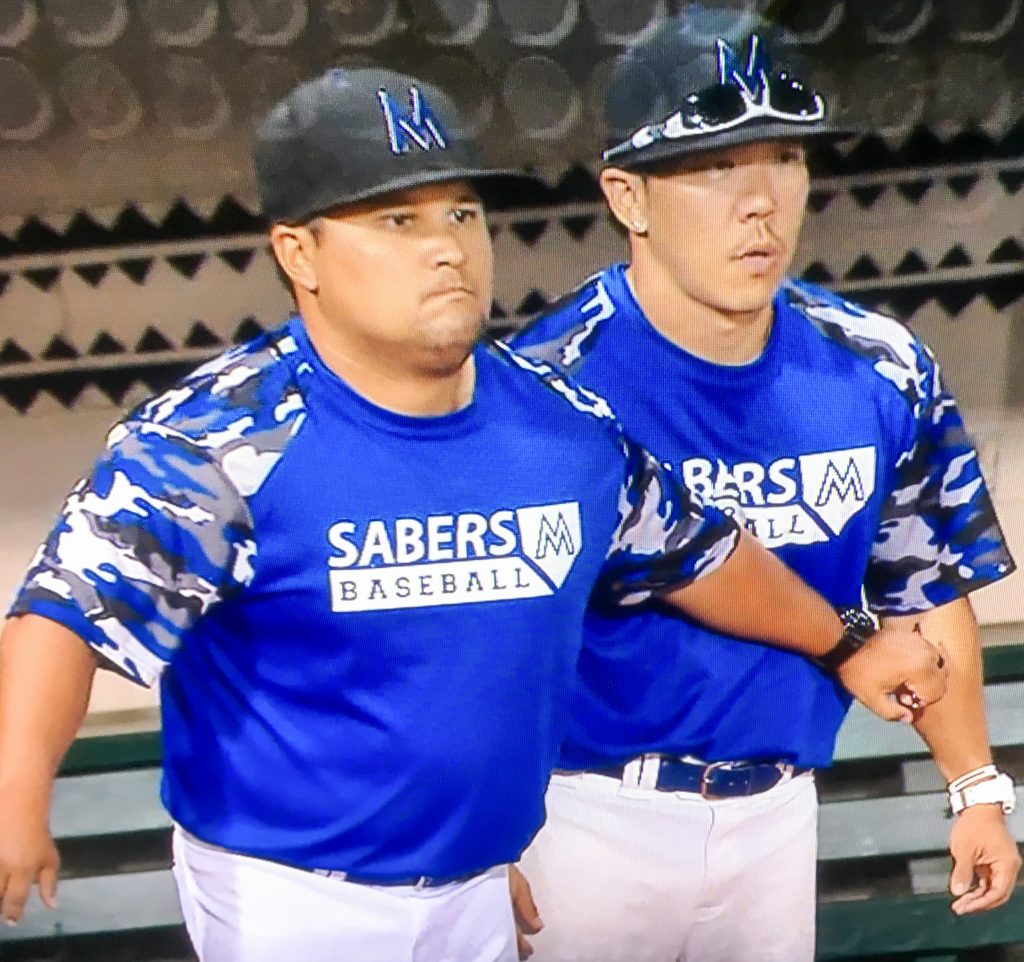 “Our team’s plan was to get on base and try and find small hits, in hopes of cashing them in somehow,” said Lalim in a post-game interview.

When asked about the all-Neighbor-Island final on Saturday, Lalim said: “It’s something different and we have to bring the best that we got and continue to play as a team.”

Maui High beat Castle 9-2 in it’s only other state championship final appearance in 1982. The Sabers were coached by William Perry. A win against Waiakea on Saturday would mark Maui High’s seventh state championship. The school has three boys state golf titles (1988, 1993-94) and two state titles in boys track and field (1987 and 1995). 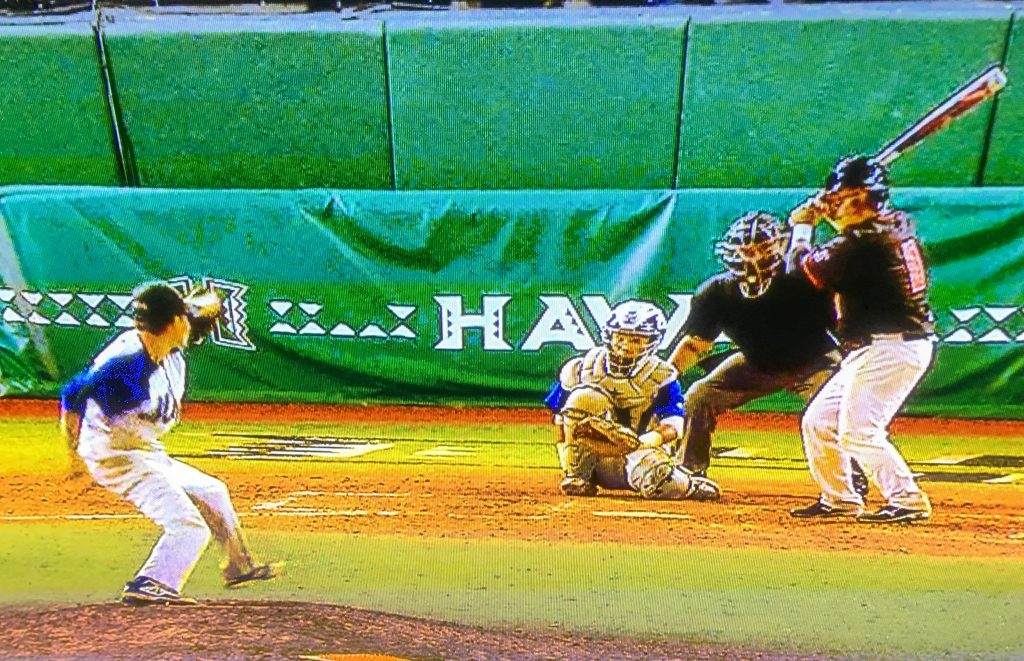 Maui High’s winning pitcher Mikito Barkman got Campbell to ground out, fly out and pop out to end the game Friday at Les Murakami Stadium. Photo from OC16 telecast.

Win or lose, the Sabers are expected to receive a hero’s welcome when they return to the Valley Isle Sunday morning at 8:30 via Hawaiian Airlines. Fans are encouraged to show their support for the team by wearing Royal Blue at the airport tomorrow.

Also coming through in the Sabers’ big sixth inning, was Waylor Golis-Bacos, who doubled and his pinch runner took third on Mikito Barkman’s single to to center. Then Campbell relief pitcher Darien Robinson gave up an RBI single to Orrion Suda, which left Maui trailing 4-3. A two-out single to the shortstop by Kaipo Paschoal would eventually load the bases for Lalim’s big two-run double.

Unseeded Maui High crushed Mililani 12-2 in the first round, before upsetting top-seeded Saint Louis, 8-6, in Thursday’s quarterfinal action. The Sabers had 11 hits in each of those two victories coming into Friday’s semifinals against Campbell, which upset fourth-seeded Hilo 5-4 to advance.

MIL champion and third-seeded Baldwin dropped its quarterfinal game to Kamehameha-Kapalama 6-1, and was eliminated from the tournament on Friday after losing to Kailua 7-2. 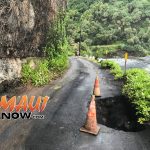 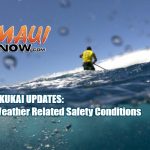