The Merwin Conservancy presents Dr. Pualani Kanakaʻole-Kanahele in the Green Room on Friday, June 9, 2017 in the McCoy Studio Theater at the Maui Arts & Cultural Center, starting at 7 p.m. 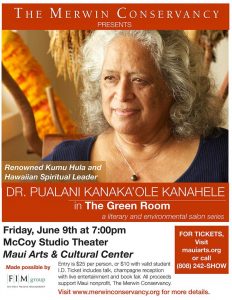 Dr. Kanahele is a kumu hula and Hawaiian spiritual leader from Keaukaha on the Big Island. As a Hawaiian cultural expert, she will speak about the Kumulipo: the mele koʻihonua (genealogical chant) which “heralds existence from dawn to dawn or the numerous beginnings and endings.”

Dr. Kanahele is known to be highly influential in the resurgence of Hawaiian practices and interest in all things Hawaiian. She and her sister Nalani are the daughters of the late hula and chant master Edith Kanakaʻole, and have led the world-renowned classical Hawaiian cultural dance and dance group, Halau o Kekuhi.

In 1995, she co-wrote and directed the first opera-length stage hula drama, Holo Mai Pele, based on the Hawaiian literary saga of Pele and Hiʻiaka. She also co-directed the film version for the PBS Great Performances series, which won the 2001 CINE Award-Golden Eagle for excellence in film production. Among her many audio books and articles is Puka Kamaʻehu, a CD recording nominated for a Grammy Award in 2005.

The presentation will be followed by an intimate Q&A with the audience, followed by a book signing in a courtyard reception with dessert, beverages, and live musical entertainment.

The presentation will be followed by an intimate Q&A with the audience and book signing at a courtyard reception with dessert, champagne, book fair, and live musical entertainment.

This event is presented by FIM Group. All ticket sales benefit Maui the nonprofit Merwin Conservancy. Tickets are $25; $10 for students with a valid ID (plus applicable fees). 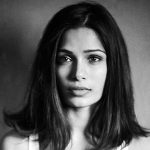 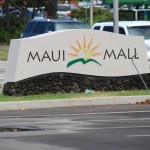