West Maui fire crews responded to a brush fire reported mauka of Hookahua Street and on the south side of Lahainaluna Road at 2 p.m. on Saturday, July 8, 2017.

Lahaina firefighters arrived on scene at 2:11 p.m. and found about a half-acre of
light brush on fire and moving quickly towards homes on Hookahua St.

A battalion chief, two engine companies, a ladder company, and a water tanker
from Lahaina and Napili battled the fire and were able to stop it before it impacted any structures.

No structures were damaged, but flames came to within 40 feet of one home. An
electrical power pole for a 69,000 volt transmission line had been damaged in the fire and was threatening to collapse, hampering firefighter’s efforts to mop up the fire which scorched a total of 3 acres.

No dollar estimates were available for the damaged power pole. There were also no injuries to report.

Police closed Lahainaluna Rd. for about an hour until fire crews could get a
handle on the fire.

The brush fire was ruled accidental after it was discovered that three 12-year-old boys were playing with fireworks and the strong winds blew it towards dry grass, setting it on fire. One of the boys did the right thing and quickly called 911 to report what had happened. 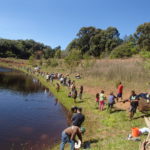 Open Fishing for Rainbow Trout at Koke‘e Runs Through September 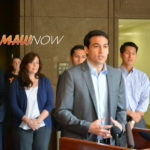