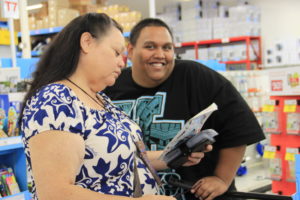 Alaka’i looks over the list of supplies she and Da Island Boy need to collect at Office Max today. Photo: Marlo Antes

For five years Pacific Media Group and Maui United Way have partnered to provide the necessary “tools for school” for families who need assistance with providing supplies for their children before heading back to school.

Over the last three weeks, PMG campaigned for donations from the community and HMSA provided a generous $2,000 donation for the cause.

Three teams split up at Office Max today to gather supplies on their list. One team that provided plenty of entertainment throughout the afternoon was KPOA’s “Morning Goddess” Alaka’i and Ke’van “Da Island Boy.” The other team consisted of Makana Rosete, Community Impact Coordinator for Maui United Way and Maui High student Jolee Correa-Tanaka, along with help from other students. The last team consisted of members from HMSA.

Rosete and Tanaka said this year there was over 15,000 requests for school supplies, the most yet. “About two years ago we were able to satisfy about 85% of requests, last year we were only able to cover 60-66% which was 3,063 supplies, and this year we have a request of over 15,000, so we need to increase the amount we’re going to be providing the kids on Maui,” Rosete said.

Correa-Tanaka explained to Alaka’i that the increase could be due to school drives being discontinued around Maui, “The need has been coming to us since we’re the only ones that are doing it on Maui,” she said.

The 2015 Tools for School Drive provided school supplies for 408 keiki with a collection of 3,500 supplies donated by the Maui community.

By the end of the afternoon 10 carts were filled with pencils, erasers, colored pencils, notebooks, crayons, markers, folders, rulers and much more for the students around Maui. All donations are distributed through Maui United Way’s various non-profit partner agencies.

Island Hospice and Four Seasons have also donated school supplies to the cause. For more information on how to donate, click here. 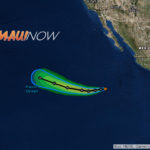 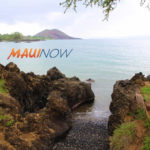