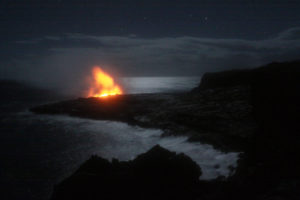 Glow from an active ocean entry on Kīlauea Volcano’s Kamokuna lava delta was visible on the evening of September 27, when the 2017 delta was near its maximum size of 8-10 acres. Since then, the edges of the delta began to crumble into the sea. With no lava entering the ocean since November, ocean waves slowly erode the lava delta, further reducing its size. USGS image.

Since it began in 1983, the eruption has produced a range of volcanic processes and hazards, from captivating high lava fountains to majestic ocean entries. And after 35 years, it’s still going strong.

The year started with a bang, or rather, a collapse of the eastern Kamokuna lava delta formed by an ocean entry during the last five months of 2016. By New Year’s Day 2017, most of the delta was gone, along with part of the adjacent sea cliff. Approximately 25 acres collapsed into the ocean, piecemeal over a period of four hours, leaving only 2.5 acres of the original delta in place.

Kīlauea’s Episode 61g lava tube was abruptly exposed in the sea cliff as a result of the collapse. With nothing to hinder it, lava poured from the tube and plummeted into the ocean several meters (yards) from the sea cliff. This formed a spectacular lava fall referred to as a “firehose flow” that continued from early January through the end of March.

During that time, the ocean entry slowly rebuilt the underwater support needed for new lava delta formation. By April, the Kamokuna lava delta had begun to reform, growing outward from the sea cliff.

In early May, this delta became unstable and collapsed. But little of the subsurface support was removed, so the Kamokuna lava delta soon began to form again.

Over the next two months, a ramp of crusted lava built up on the delta, reaching the lava tube’s exit point on the sea cliff, and ultimately forming a hard shell around the lava fall. Multiple cracks formed across the delta as it slowly slumped into the sea.

By August, the Kamokuna lava delta was about 8 to 10 acres in size. It remained that size through November, as lava continued to create new land, although bits of the delta edges occasionally crumbled into the sea. However, between August and November, enough material was added to the lava delta to double its height above sea level.

In October, an apparent blockage within the lava tube system caused many overflows on the sea cliff. This created dozens of new, small lava flows cascading over the sea cliff just west of the Kamokuna ocean entry. But this activity lasted only two months before the lava became too viscous (or sticky) to continue exiting the tube.

Where is all the lava going now?

Although eruption rates remained low (as best we can tell), breakouts from the blocked tube occurred frequently in 2017. With the western, primary lava tube becoming increasingly blocked, lava emerged from the tube in many locations along its entire length.

Some breakouts remained in the upper flow field while others flowed from the top of Pulama pali and ponded at its base. On the lower flow field, numerous and sustained breakouts were scattered across the coastal plain. Few of them formed coherent flows and, as a result, lava resurfaced the same areas numerous times.

Nearly all of the breakouts were active for several weeks to months, allowing intrepid visitors who braved the rugged cross-country trek to witness active lava.

Back at Pu‘u ‘Ō‘ō, the lava pond at this vent was active all year. It rose and fell in concert with large deflation-inflation events at the summit of Kīlauea. The Pu‘u ‘Ō‘ō lava pond circulation is slower than that in the Halemaʻumaʻu lava lake, causing a thicker crust to form on the pond’s surface. This crust was disrupted during several small rockfall events throughout the year.

As the Puʻu ʻŌʻō eruption turns 35, Hawaiian Volcano Observatory staff prepare for another year of dynamic activity on Kīlauea.

Happy birthday, Pu‘u ‘Ō‘ō! And Happy New Year to everyone else!

This past week, Kīlauea Volcano’s summit lava lake level fluctuated with summit inflation and deflation, ranging about 102–116 ft below the vent rim. On the East Rift Zone, the 61g lava flow remained active downslope of Pu‘u ‘Ō‘ō, with scattered breakouts on the pali and coastal plain, but no ocean entry. The 61g flows do not pose an immediate threat to nearby communities.

Mauna Loa is not erupting. Rates of deformation and seismicity remain above long-term background levels, but rates are decreased from earlier in the year. Similar decreases have occurred in the past during the ongoing period of unrest; it is uncertain if these lower rates will persist or will pick up again in the near future. Small-magnitude earthquakes occurred beneath the summit caldera and upper Southwest Rift Zone at depths less than 3 miles. A few deeper earthquakes were scattered beneath the volcano’s southeast and west flanks at depths of 3‒12 miles. GPS and InSAR measurements continue to show deformation related to inflation of a magma reservoir beneath the summit and upper Southwest Rift Zone. No significant changes in volcanic gas emissions were measured.

One earthquake with three or more felt reports occurred in the Hawaiian Islands this past week: a magnitude-3.1 earthquake 4 miles west of Kalaoa at a depth of 6 miles on Dec. 26 at 2:50 a.m. HST. 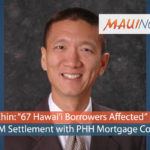 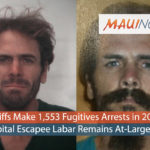