Governor David Ige spoke with Maui Now in an exclusive phone interview on Wednesday, Jan. 17, regarding the false missile alert that took place on Saturday, Jan. 13, at 8:07 a.m.

Gov. Ige spoke with us about the effects on tourism, what would actually happen across all levels of communication had the alert been real, if he has spoken with President Trump about the situation and how an attack on Honolulu would effect neighbor islands, such as Maui.

While Gov. Ige assured that the event will not happen again, he talked to us about what was learned from Saturday’s scare, his plans for improvement, and what changes need to be made.

TV stations also were showing the Emergency Notification on certain channels. The red TV alert stated, “The US Pacific Command has detected a missile threat to Hawaii. A missile may impact on land or sea within minutes. This is not a drill. THIS IS NOT A DRILL. If you are indoors, stay indoors. If you are outdoors, seek immediate shelter in a building. Remain indoors well away from windows. If you are driving, pull safely to the side of the road and seek shelter in a building or lay on the floor. We will announce when the threat has ended. Take immediate action measures. THIS IS NOT A DRILL. Take immediate action.” 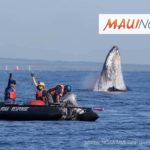 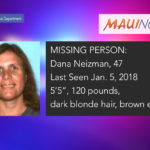