The Super American Circus 2018 Hawaiʻi Tour, hosted by RTG Entertainment, is bringing the modern one-ring circus to the War Memorial Stadium in Wailuku, March 16, 17 and 18, 2018.

The circus will showcase some of the best acts in the world including headliner Bello Nock, referred to as the “World’s Greatest Comic Daredevil.” Nock has been featured in the “Guinness Book of World Records” for a highwire walk over a cruise ship and has performed several stunts in New York City, including rappelling off of Madison Square Garden and hanging from a helicopter over the Statue of Liberty. In 2017, Nock was a finalist on the popular television show “America’s Got Talent.”

Other thrilling acts will include the Slide for Life, Aerial Hoop Display (an elegant aerial display of “Davangie” performers), Rolla Bolla (balancing on a flat board placed on top of a cylinder while juggling or performing handstands), Motorcycle High-Wire (a high wire stretched above the arena floor and used for balancing while riding across the wire on a motorcycle), Wheel of Destiny (a large rotating apparatus in which Bello runs the perimeter skipping rope while blind-folded), Trampoline (performing twists, flips and comedy), Transformation Quick-Change (the illusion of costume change), Juggling (The Aristov’s use various methods to throw and catch objects in the air at the same time) and more.

Cornell “Tuffy” Nicholas will be the Ringmaster for The Super American Circus. “Tuffy” comes from a family with an extensive circus history: his father “Count Nicholas” was the lead ringmaster extraordinaire of the traveling Ringling Brothers circus and his mother worked as a bear trainer. Nicholas has spent much of his life on the road and has produced and managed more than 5,000 shows in the US and around the world. “The satisfaction knowing that you have created something that is not only successful, but also brings happiness to people from all around the world is very rewarding,” he said.

Every ticket sold will benefit the non-profit Kamaʻāina Kids. Families will also be entertained with pre-show and intermission activities that include face painting, bounce houses, obstacle course, a giant slide and photos with circus artists. Traditional treats such as snow cones, cotton candy and popcorn will also be available.

Showtimes on Maui are:

The Advanced General Admission Family Pass (admits two adults and three children – 12 and under) is available online only for $69.50. 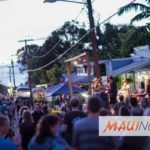 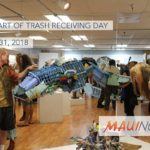