The brush fire reported yesterday in the Kula Ag Park has not grown in size and is still estimated at 10 acres. It still has not yet been officially declared “contained”. Crews will be working throughout the day continuing mop up of hotspots and securing the perimeter. The only property damage to report is that to agricultural fencing. The cause of this fire remains undetermined.

At approximately 2:15 pm this afternoon, MFD crews were called to reports of a brush fire in the area of the Kula Agriculture Park in Pulehu.

Shifting winds and difficult access made for challenging conditions. Crews had to strategically work to protect farm equipment and structures, while also stopping the spread of this fire.

As of 4 p.m., it is estimated that 10 acres has burned through the Ag Park area. While significant progress has been made to control this fire, it has not yet been officially declared “contained”.

Crews will remain on scene to put out hot spots and fully secure the perimeter of the fire. The cause of this fire has not yet been determined, and there are no injuries to report.

Pūlehu Road in Kula is CLOSED between Holopuni and the “Y” Omaopio/Pūlehu intersection due to a brush fire. Fire crews are on scene. 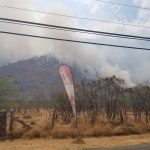 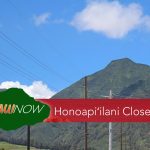