Behind the Scenes & Into the Woods with MAPA

UPDATE:  Due to circumstances related to Hurricane Lane, the Friday, Aug. 24 and Saturday, Aug. 25 performances are cancelled.  Into The Woods is now opening on Sunday, Aug. 26 at 3:00 p.m. at the Maui Arts & Cultural Center (MACC).

Ticket holders for Friday and Saturday night are able to exchange their tickets for any of the other show dates, including a new performance added on Thursday, Aug. 30 at 7:30 p.m.

For other questions regarding tickets, including exchanges and refunds, please contact the MACC Box Office at 808-242-SHOW (7469) or visit   their website for details.

Sitzprobe.  Heard of it?  Maybe not, but Maui’s musical theatre community wouldn’t miss it!  The term signifies when the cast and orchestra together to rehearse their show for the first time.  In this case, they got to meet this weekend in the performance space itself at the Maui Arts & Cultural Center, which was special for the Into the Woods team.

“We start blending the orchestra, we’re on the stage for the first time, we’ve got the cast here, so it’s starting to pull all the elements together to create the big finished look,” explains David Johnston,  executive and artistic director for Maui Academy of Performing Arts (MAPA).

Called “edgy, whimsical, and wickedly funny,” Into the Woods puts an entertaining twist on the popular fairy tales we grew up with.  It’s based on a book by James Lapine, with music & lyrics by Stephen Sondheim.  MAPA describes the show as “an enchanting musical adventure that goes beyond ‘happily ever after.'”

MAPA musical director Gary Leavitt says since Sondheim’s masterpiece is a “bucket-list show” for many actors, it attracted an A-list cast.

“When they heard we were doing Into the Woods, we had 70 people audition for 18 roles,” says Leavitt. “That’s how much people were hungry to do this.”

Learn more about why MAPA chose this show in our video above.  With storylines that feature a bit of mystery, tons of irreverent humor and a touch of seduction, Johnston says working with the talented cast was a pleasure and an honor.

“We had a great time,” he smiles, “lots of laughs, lots of great conversations, in terms of character development and meaning of the show, and there have been some tears along the way too because it’s such a poignant message in the second act”.

Into the Woods premieres on Friday, Aug. 24, and runs through Sunday, Sept. 2 in the Castle Theatre at the Maui Arts & Cultural Center.  Parental guidance is suggested.  Learn more, see show times and buy tickets here. 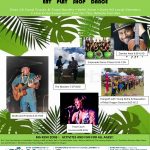 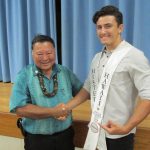